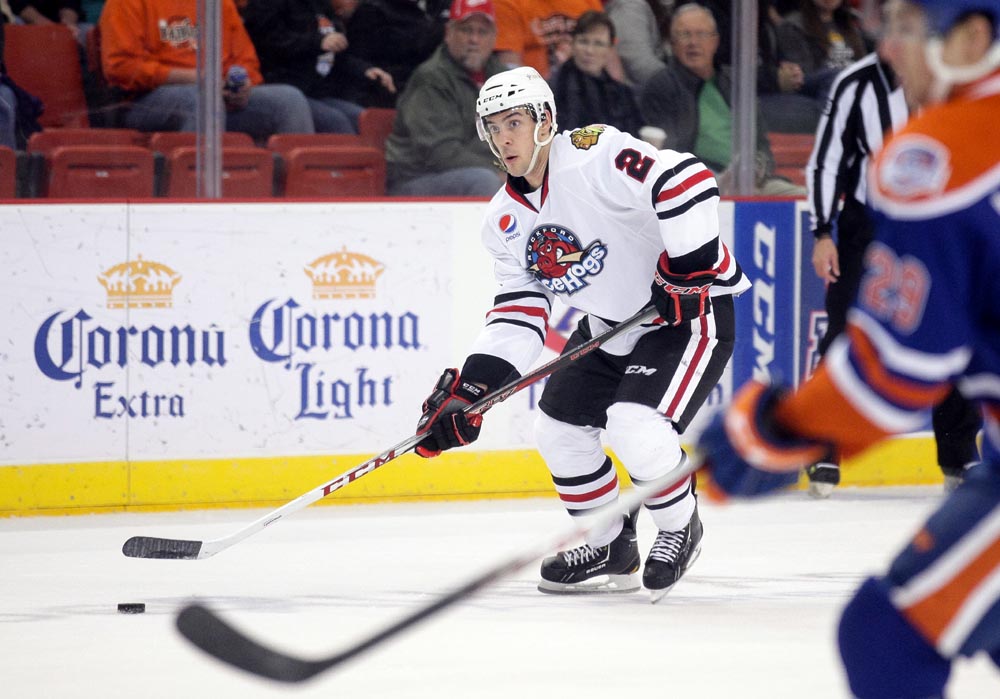 With last week’s announcement that the Blackhawks had signed defensemen Theo Peckham and Mike Kostka, the organization’s pool of defenseman for the 2013-14 season is taking shape. Peckham and Kostka would figure to join Adam Clendening, Klas Dahlbeck, Dylan Olsen and Shawn Lalonde on the IceHogs blue line. Also battling for ice time with the IceHogs will be AHL signings Viktor Svedberg and Jared Nightengale.

Lalonde, 22, is a restricted free agent this summer. He did receive a qualifying offer from the Hawks but has not yet signed a new deal with the organization (as of Monday morning). He posted five goals and 18 assists in 59 games with the IceHogs last year.

UPDATE: Lalonde has reportedly signed to play in Germany during the 2013-14 season.

Clendening, who will turn 21 in late October, was the 36th overall pick in the 2011 NHL Draft. He led Rockford defensemen with 46 points (nine goals, 37 assists). In his rookie season with the IceHogs, Clendening was named to the AHL All-Star Game and received postseason recognition as well, earning Second Team honors on the 2012-13 AHL All-Star Team.

Dahlbeck, 22, was a third round pick by the Blackhawks in 2011. He played 70 games for Rockford last year, scoring one goal with five assists. He showed promise to be a good, stay-at-home defenseman.

Olsen, 22, was the Hawks’ first round pick in the 2009 NHL Draft. After seeing action in 28 NHL games with the Hawks in 2011-12, he disappointed in Rockford last year with only two goals and nine assists in 50 games. With only one year left on his entry-level contract, and a number of talented players coming soon, this will be a crucial season for Olsen’s future with the organization.

Svedberg, listed at 6-8, signed an AHL contract with Rockford in May after spending the 2012-13 season with Frolunda HC of the Swedish Elite League. Nightengale, 30, played with Duncan Keith at Michigan State during the 2002-03 season. Rockford announced the signing of Nightengale on Monday.

The Blackhawks did not extend a qualifying offer to Joe Lavin, who is an unrestricted free agent.

One position that is intriguing is who will be the seventh defenseman on both the AHL and NHL roster for the bulk of the 2013-14 season.

Ryan Stanton could in the lineup for either Chicago or Rockford when the season begins, and would figure to have a good shot of making the NHL roster… if there weren’t seven defensemen back from the Stanley Cup team in front of him.

The depth in both Chicago and Rockford raises a couple questions.

Will the Hawks move Sheldon Brookbank before the season starts?

And who will be the odd men out in Rockford?

The Blackhawks have already dumped one dead weight piece – Daniel Carcillo – to make room for younger players. With Stanton appearing to be ready for a chance, and Clendening not too far away, the organization might look to make a move with Brookbank before (or during) training camp.

Meanwhile, are Lalonde and Olsen playing their way out of the organization? With a crop of good, young players entering the system and a couple – Stephen Johns and Justin Holl – entering their final seasons in college, ice time could become scarce for underwhelming players.

With the contracts already on the books, and assuming Lalonde is back, there are far too many bodies for the available roster spots with the Blackhawks and IceHogs. Look for something to give before October arrives.