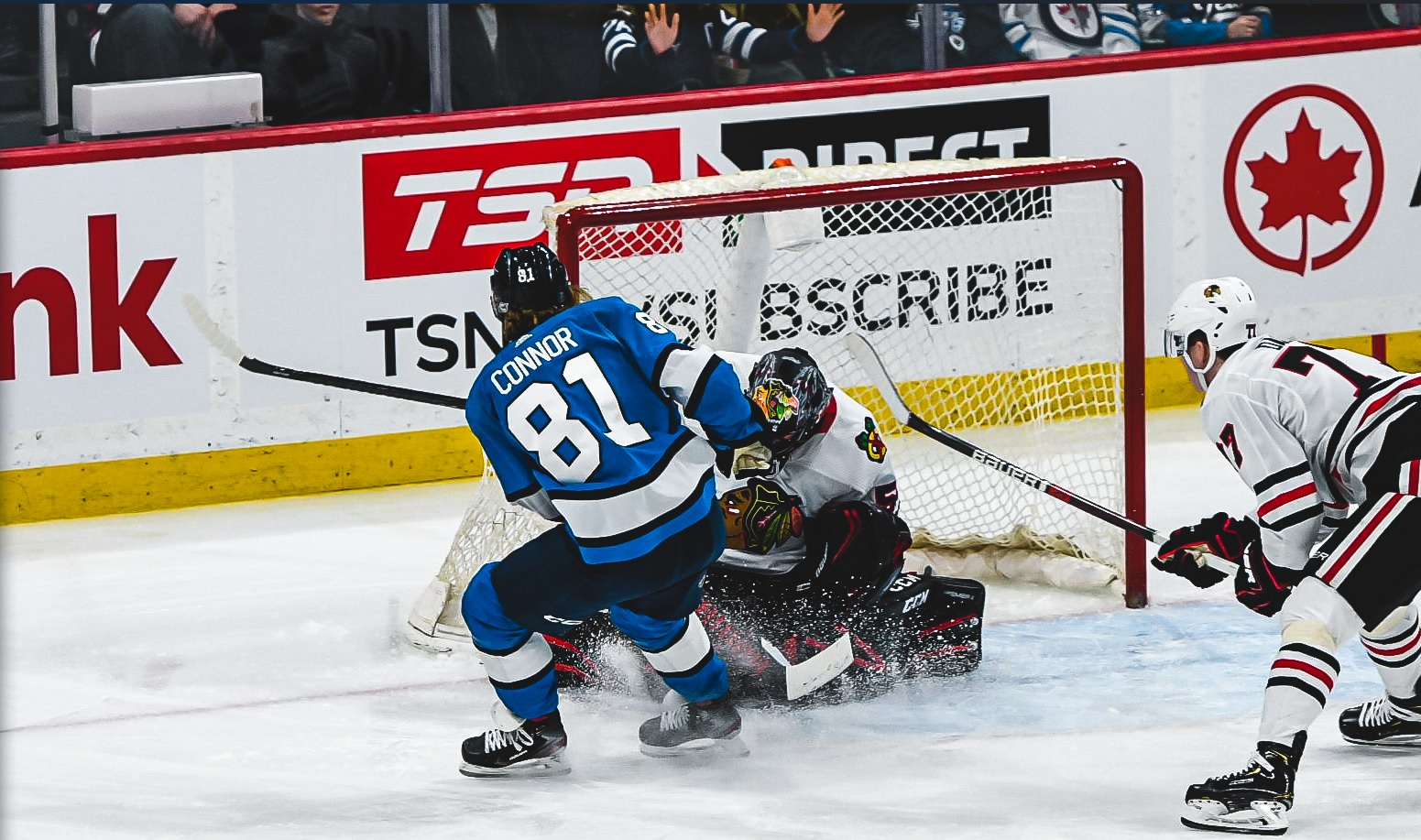 The Blackhawks began a potentially season-defining five-game road trip in Winnipeg – where the trip will also end.

Chicago had points in their last three contests but had lost three of their last four, the last two coming in overtime. A game against the Jets came with playoff implications. Winnipeg was three points ahead of the Hawks coming into Sunday night’s game but Chicago had two games in-hand.

Corey Crawford was between the pipes, newly-acquired defenseman Nick Seeler dressed for the first time as a member of the Blackhawks in place of Adam Boqvist and Matthew Highmore was back in the lineup up front.

The game started perfectly for Chicago. Dominik Kubalik scored 15 seconds into the game to give the Hawks a 1-0 lead.

Jonathan Toews picked up an assist on the goal, giving him 800 career regular season points. Drake Cagguila was also credited with an assist.

At almost 11 minutes into the game the Hawks extended their lead to two. Patrick Kane set up Brandon Saad.

Kane and Seeler were credited with assists on the play, giving Seeler his first point with the Blackhawks.

The Jets out-shot the Hawks 10-9 in the first but Chicago took a two-goal lead to the room.

Kyle Connor cut the lead in half at 3:44 into the second period with a short-handed goal. Alex DeBrincat whiffed on a pass as the Jets were off to the races. Winnipeg would put some more pressure on the Hawks in the second period, putting 12 shots on Crawford but only one went in. After 40 minutes of hockey the Blackhawks led 2-1.

For eight minutes to begin the third period the teams appeared to be pretty even.

Then the wheels blew off.

Blake Wheeler scored a power play goal at 9:04 to tie the game. Crawford appeared to be upset with the amount of friction he was feeling from Winnipeg skaters in front of him.

When Andrew Copp scored four minutes later, Crawford lost his mind. The Jets led 3-2 and Chicago’s goaltender turned around and shattered his stick over the crossbar. He was rightfully pissed that what had been a terrific night on his part was going to waste and quickly.

Patrik Laine and Connor scored into the empty net to make what had been a pretty good, close game a blowout loss for the Blackhawks. The final score: 5-2 Winnipeg. The Jets scored five unanswered goals in the final 40 minutes to runaway from a Blackhawks team that needed points in the standings.

And now, even though the Hawks came in only three points behind the Jets for fourth, the Blackhawks find themselves in last place in the Central Division.

Toews skated 18:55 and won 18 of 27 faceoffs but was called for two critical penalties in the third period.

Kane had two hits, two takeaways and three shots on net with one assist in 21:22.

Kubalik led the Blackhawks with four shots on net and had four more attempts miss the mark.

Kirby Dach won five of nine faceoffs in 14:26 and was credited with two hits and two shots on net.

Seeler was credited with an assist and two hits in 14:59. He also blocked two shots.

Duncan Keith was the high ice time man for Chicago, predictably. He skated 26:14 with three shots on net and two hits. He was the only Blackhawks defenseman not credited with a blocked shot, however. Slater Koekkoek led Chicago with four blocked shots.

Boqvist did not dress after leaving the Hawks’ last game with a right shoulder injury. He is on the trip with the team, however, and is considered day-to-day.

101 thoughts on “Blackhawks Implode In Third, Lose To Jets”