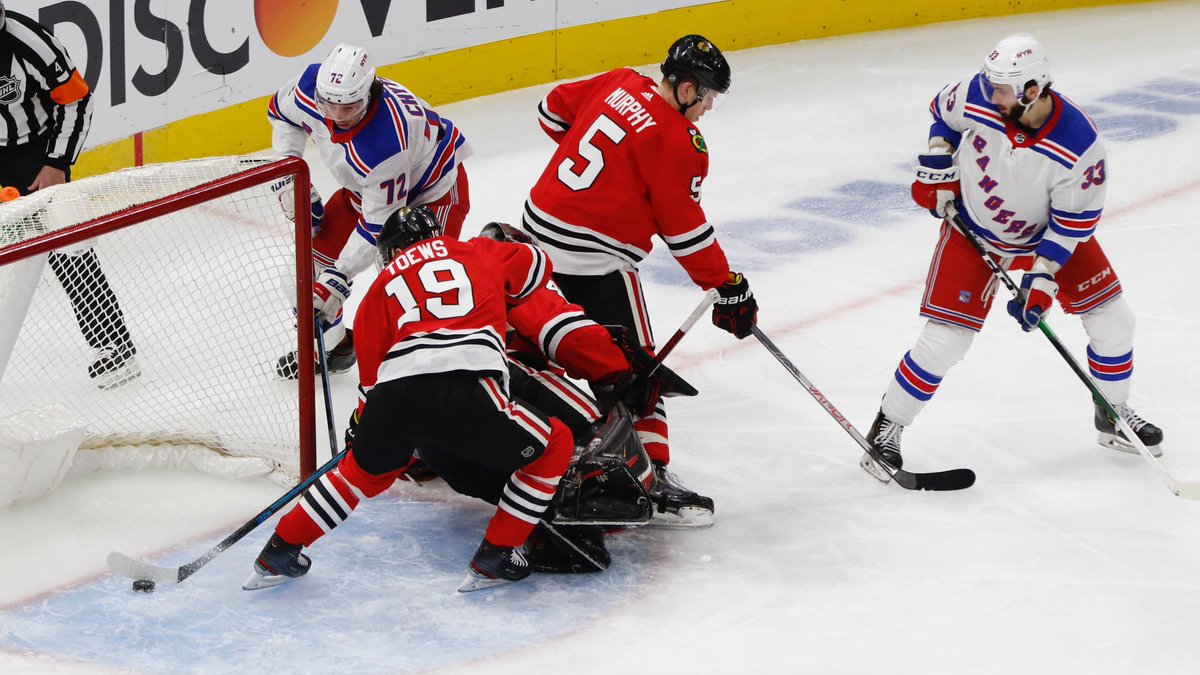 When the schedules came out for the 2019-20 seasoh, Wednesday night was supposed to be about young promise and remembering history. It became a seller’s night with a focus on players improving their stock ahead of Monday’s trade deadline.

The young promise could have been the headlines. Kaapo Kakko and Kirby Dach were selected second and third overall, respectively, in the 2019 NHL Draft. Each came into the game with 19 points on the season.

The history stirred emotion. Before the game former Blackhawks defenseman Jack O’Callahan dropped the ceremonial first pick. A few days shy of the 40th anniversary of the Miracle on Ice, the member of the 1980 United States’ men’s hockey team that upset Russia came out in his USA sweater and dropped the puck between two of the best players in the game today from those two countries: Patrick Kane and Artemi Panarin.

But the question of the evening was whether or not this would be the final appearance in a Blackhawks’ sweater by Robin Lehner. There were plenty of eyeballs there to watch the Lehner and others on the two struggling rosters who might be on the move in the coming days.

One rookie made an impact early in the game. Kakko was credited with an assist on Filip Chytil’s goal 1:58 into the game that gave the Rangers a 1-0 lead. That would be the extent of the damage for New York in the first; the visitors put 12 shots on Lehner in the period. Chicago also put 12 shots on net but rookie phenom Igor Shesterkin was terrific.

Each team had a power play in the first. Neither did anything with it.

The Blackhawks tied the game less than three minutes into the second period. Duncan Keith set up Dominik Kubalik who made it count.

The helper for Keith was significant in his Hall of Fame career.

Chicago got two more power plays in the second period and wasted both of those advantages. This, of course, should come as no surprise. The Hawks were 0-14 on the power play on their recent five-game road trip and have been miserable with the hypothetical “advantage” for years.

The Blackhawks out-shot the Rangers 16-10 in the second period and the teams carried one goal each into the third period.

Would this be the final 20 minutes in red for Lehner?

If so, it didn’t start well for the veteran. He allowed a goal to Pavel Buchnevich (that he didn’t have much of a chance on thanks to the defense in front of him) at 2:33. Dylan Strome’s mom was in attendance to watch two of her sons – who took the night’s opening faceoff – and she saw Ryan Strome score a power play goal 4:01 into the third period.

The Blackhawks were getting out-worked all over the ice early in the third.

But, as they have done a maddening number of times this season, the Blackhawks showed a spark after digging a two-goal hole. Kubalik scored his second of the night and 25th of the year at 6:05 into the third to bring the Hawks back to within one.

Jonathan Toews and Drake Cagguila were credited with assists on the second Kubalik goal.

Would the Blackhawks find some momentum?

Chris Kreider scored 1:43 after the Kubalik goal and Panarin scored 53 seconds later to make the score 5-2 in favor of the Rangers. The goal gave Panarin 399 career regular season points.

And the United Center was dead quiet.

For a team talking like they needed to battle their way back into the playoff mix, another third period collapse reminded Blackhawks fans that this is a team headed for the lottery again this summer. Stan Bowman shouldn’t have needed additional confirmation beyond the team shitting the bed on the road trip that it’s time to sell, but the Blackhawks certainly helped ease the decision making of their front office.

However, the line of Toews, Kubalik and Cagguila kept battling. Less than two minutes after the Panarin goal, Toews made a pretty pass to Cagguila who scored his seventh of the year to cut the Rangers’ lead back to two.

After two goals were scored in 40 minutes, the teams combined to score six times in the first 11:39 of the third period.

Mika Zibanejad scored the sixth goal of the night for New York at 13:37 into the third.

Not a good look for Lehner, who should have a suitcase packed “just in case” between now and Monday. His defense wasn’t doing him any favors – Adam Boqvist, who was a scratch in the finale of the road trip, had another tough night. And the Blackhawks were getting out-shot 17-9 through 14 minutes of the third period. But Lehner would undoubtedly like a few of the Rangers’ goals back.

Perhaps the most intriguing part of the third period was the Rangers’ making a trade during the game.

The Rangers were already carrying three netminders and Shesterkin appears to be the future. Adding a fourth for… nothing? Sure, why not.

Cagguila went to the box with a little more than one minute left in the game and the Rangers finished the game on the power play.

Lehner allowed all six against 41 shots. The Blackhawks put 40 shots on net against Shesterkin but he stopped 37.

Erik Gustafsson’s showcase game in front of 11 scouts saw him lead the Blackhawks in ice time (22:46) and blocked shots (five).

59 thoughts on “Blackhawks Implode In Third Period (Again), Get Crushed By Rangers”