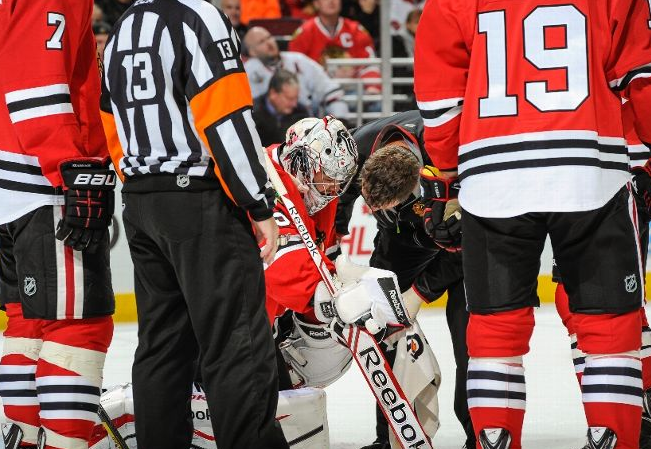 The Blackhawks handled their business with a dominant 6-2 victory over the Florida Panthers at the United Center. Chicago scored three power play goals and the penalty kill was perfect in five short-handed situations in an all-around beating.

Unfortunately, a good win will be overshadowed by a lower-body injury suffered by Corey Crawford in the first period. Crawford left the game and did not return. The Hawks jumped to a quick lead after Tomas Kopecky made a dangerous, illegal hit on Niklas Hjalmarsson. Only 70 seconds into the game, Patrick Sharp scored a power play goal to put the Hawks on the board.

Sean Bergenheim was hit with two minor penalties for interference and unsportsmanlike conduct after a collision with Michal Rozsival later in the first. Brent Seabrook added the Hawks’ second power play goal of the first period late in the first minor penalty.

Crawford faced only four shots in 13:45, but wasn’t able to get up after making the fourth save. He left with his teammates up 2-0, and was replaced by Antti Raanta. Raanta made 28 saves against 30 shots in a solid relief appearance.

With their starting netminder out of the lineup, the offense continued to pour it on.

Marian Hossa scored only 37 seconds into the second period to give the Hawks a 3-0 lead, but “the most dangerous lead in hockey” proved to be too comfortable. Goals by former Blackhawks defenseman Dylan Olsen and Marcel Goc brought the Panthers back to within one by the middle of the frame, but that was the sum of the Florida offense.

Michal Handzus scored late in the second period to extend the Hawks lead back to two, and Chicago’s defense would shut the door from there.

Andrew Shaw returned from injury to make an immediate impact. He provided a great screen on Sharp’s goal in the first period, and tipped in another Sharp shot early in the third period for the Hawks’ fifth goal of the night. Brandon Saad added a breakaway goal late in the game to finish the scoring on the night.

The box score for Sunday night’s victory points to why the plus-minus statistic is useless. Jonathan Toews (two assists), Sharp (one goal, two assists) and Hossa (one goal, one assist) combined for seven points, but were minus-one each. Toews won 14 of 23 faceoffs and skated 21:25 in the win, while Hossa and Sharp were limited to 15:10 and 14:53 on the night, respectively.

Patrick Kane led the team with three assists, while Seabrook and Saad had one goal and one assist each. Saad added a team-leading three takeaways to his two points in an all-around solid effort. He started on a line with Shaw and Jeremy Morin; Morin and Kris Versteeg were both credited with an assist on Saad’s goal as well.

Handzus won 11 of 20 faceoffs with his second goal of the season.

Chicago’s defense in front of Raanta was much better than in the three previous games. The Hawks were credited with 23 blocked shots as a team, led by four each from Hjalmarsson and Marcus Kruger.

Kruger was the target of a couple heavy hits from Krys Barch in the third period, who accepted an invitation to drop the gloves from Brandon Bollig. Bollig and Barch drew coincidental minor penalties earlier in the game, and continued to chirp while in their penalty boxes, but didn’t come to blows until there were just over nine minutes left in the game. Bollig was credited with three hits.

For Florida, Jimmy Hayes finished with a team-leading four hits and one blocked shot in 14:07, and Olsen added one blocked shot and one takeaway to his goal in 13:15 in the game. The Panthers had five power play opportunities and were unsuccessful on all of them.

The Hawks play in Dallas on Tuesday night.

ROSTER UPDATE: the Blackhawks recalled defenseman Mike Kostka from Rockford and activated him off IR before the game.