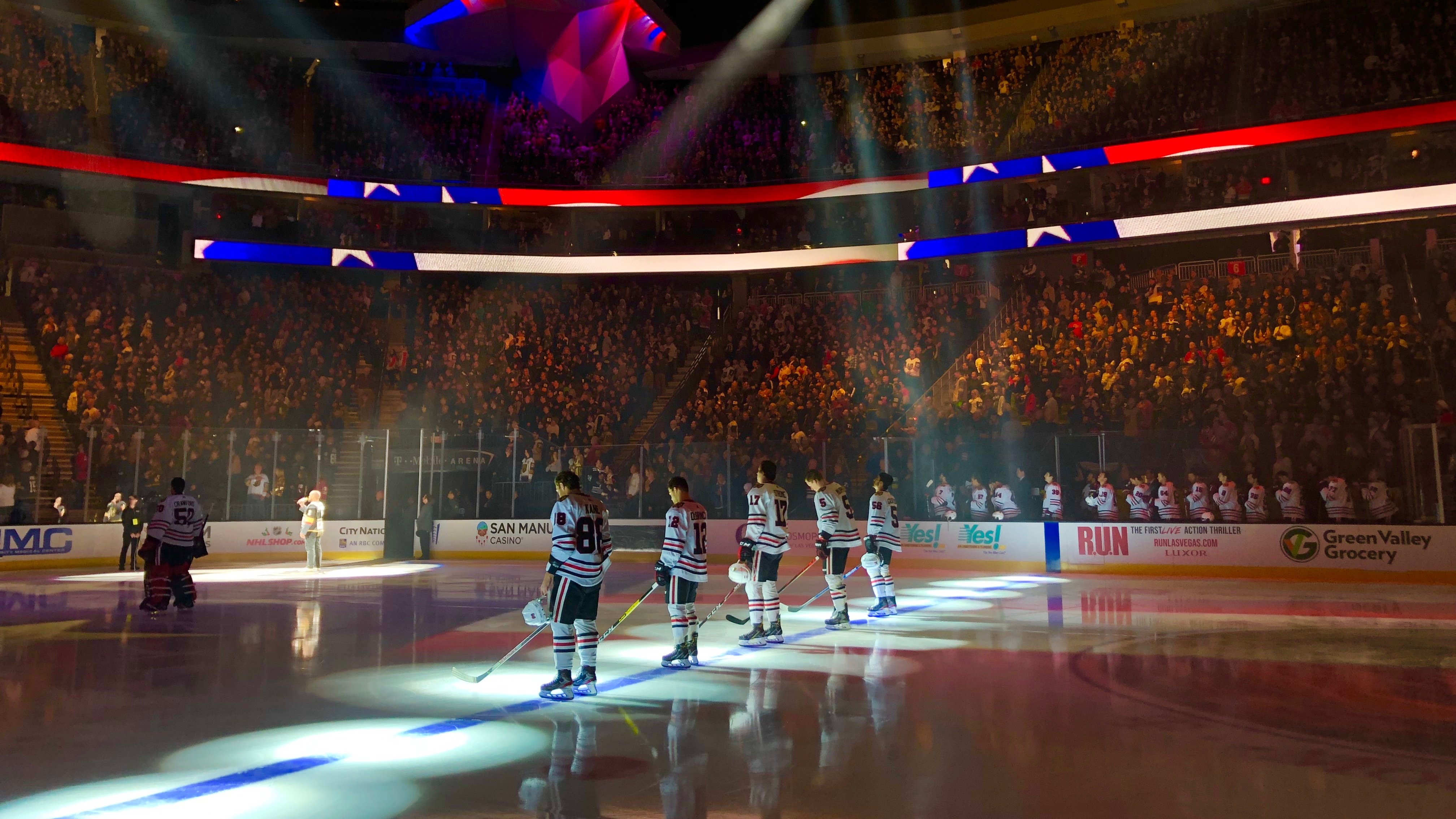 The Chicago Blackhawks took the ice in Vegas without Duncan Keith (groin), Olli Maatta (flu), Andrew Shaw and Drake Cagguila (concussion protocol). With Shaw on LTIR the Hawks were able to bring a couple young players up, and Adam Boqvist was pressed into action with Maatta still struggling to kick the virus that’s kept him out of recent action.

The game opened with 20 entertaining minutes. Corey Crawford and Marc-Andre Fleury were exceptional on both ends of the ice in the first period, keeping the score at zero.

Without question the most significant moment in the first period – indeed, the game for Chicago – came at 17:46 into the first when Mark Stone clipped Calvin de Haan. de Haan, who has been arguably the Blackhawks’ best defenseman this year, fell hard and immediately skated off the ice and kept going straight down the tunnel to the room. He did not return to the game with what the Hawks tweeted is a right shoulder injury, which is significant because that’s the same shoulder de Haan had surgery on in the spring that cost him more than four months of ice time.

After the first period, the shots were tied at 12 for each side.

Without de Haan things got out of control quickly in the second period. Reilly Smith scored a power play goal at 7:27. Four minutes later Deryk Engelland sniped home his first of the year to extend the lead to two.

Inside the final minute of the second period the Blackhawks were on a power play (a shit show of one at that) and an Alex Debrincat turnover turned into a race the other direction. Well, it would have been a race if Erik Gustafsson had given any effort whatsoever. William Karlsson put home the shorthanded tally to make the score 3-0.

When the teams went to their rooms for the second intermission, Crawford was visibly livid at the score. He deserved better than a three-goal deficit after 40 minutes but the Knights out-shot the Hawks 16-8 in the second and controlled the entire period.

Max Pacioretty scored 3:17 into the third.

The game was over but the teams had to finish the final seven minutes.

Chandler Stephenson went to the box at 18:10 into the third and the Blackhawks decided to score a power play goal. Dominik Kubalik’s eighth of the year came off assists from Alex Nylander and Boqvist with 27 seconds left in regulation.

Far too little, far too late. The Blackhawks were dominated up and down the ice. The only player who performed well for Chicago was Crawford, who finished the night stopping 32 of 37.

The Blackhawks power play was 1-4 in the game with Kubalik’s goal meaning little more than a stat to the three involved skaters.

Jonathan Toews won 10 of 21 at the dot. Dylan Strome won 11 of 21. Ryan Carpenter won seven of nine in the game as well.

Kirby Dach finished the second period strong but never got off the fourth line assignment Jeremy Colliton gave him to open the night. He skated 13:00, which is an improvement, and was credited with two shots on net and one blocked shot.

Dennis Gilbert served two minutes in the box but had a solid night. He skated 19:21 with a team-leading five hits, one shot on net and one blocked shot.

Boqvist skated 17:42. He disappeared to the room to get some medical attention during the first period but returned to the bench just before de Haan left the game.

Gustafsson was on the ice for a team-high 25:44 and was minus-two.

Congratulations to Kevin Lankinen on setting Rockford's AHL record for most saves in a single game with 55 saves tonight!@KLankinen's 55 saves surpass the previous mark of 49 set by Kent Simpson and matched by Michael Leighton.