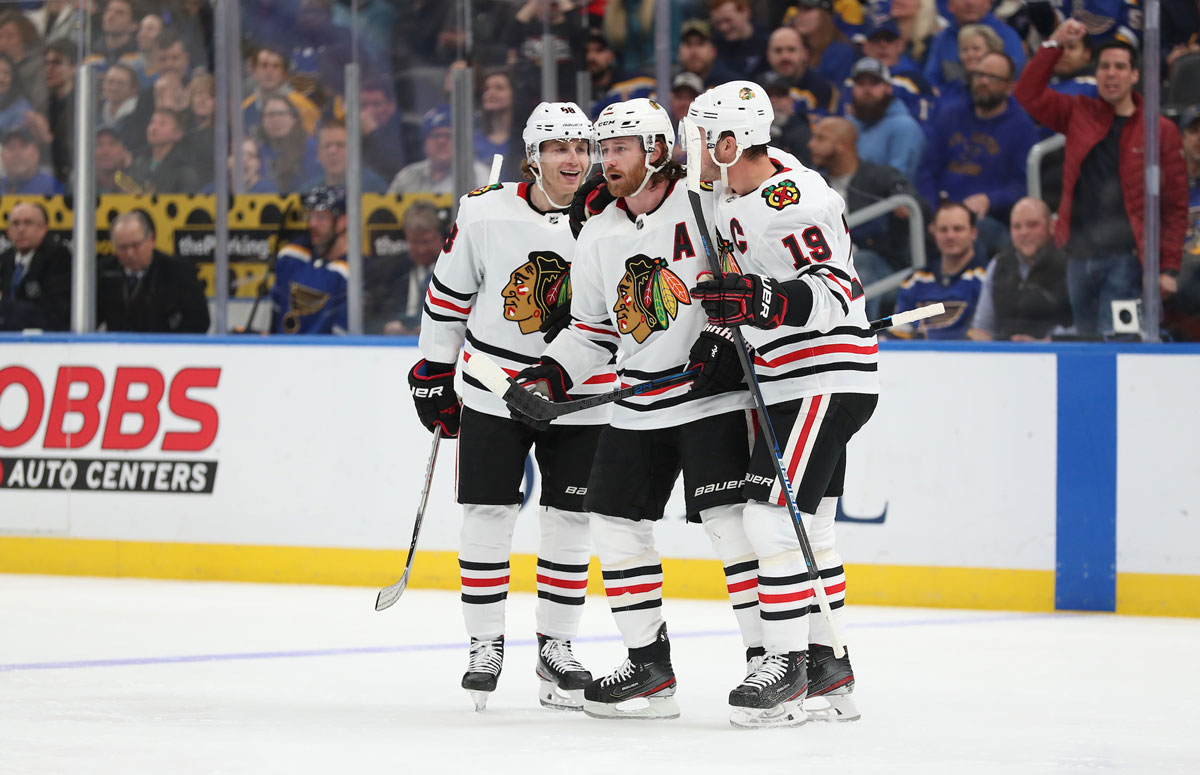 After a disappointing deadline on Monday, the Blackhawks were on the ice in St. Louis against the first place Blues. Before the game veterans, including Jonathan Toews, spoke to the media about the impact of losing an outspoken leader in Robin Lehner. It sounds like the Hawks players aren’t thrilled with Stan Bowman’s work on Monday, either.

So when the Hawks short-handed 11 seconds into the game, it felt like this game could be off to a bad start.

When the Blues scored a power play goal 33 seconds into the game, there was a feeling that this one could snowball out of control quickly.

But that was hardly the case. Duncan Keith scored a power play goal, the 100th of his career, at 10:55 to tie the game. Toews won a hard fought faceoff to pick up the only assist on the goal.

Toews and Dominik Kubalik were credited with assists on the Murphy goal.

The Blues out-shot the Hawks 12-10 in the first but Chicago led by one going to the break.

Patrick Kane extended the lead with a second power play goal for the Blackhawks 73 seconds into the second period.

Keith and Kubalik picked up the assists.

Corey Crawford was playing out of his mind, but the Hawks allowed the Blues to hang around. Robert Thomas scored at 7:38 into the second to cut the lead back to one.

Like the first period, St. Louis out-shot the Blackhawks in the second period but Chicago carried a one-goal lead to the third period.

Then the game turned into a shootout.

Ryan O’Reilly and Zach Sanford scored 16 seconds apart in the opening four minutes of the third period and suddenly the Hawks were chasing one. Jeremy Colliton burned his timeout to get his team together in hopes of breaking the Blues’ surging momentum.

Keith and David Kampf picked up the assists on Highmore’s second of the year.

Kirby Dach and Dylan Strome were credited with the assists on Saad’s marker.

Of course we weren’t done.

Justin Faulk tied the game at 9:28 into the third period. St. Louis was loud and excited for a wild finish.

Dach went to the box at 11:37 and the Blues got a fourth power play opportunity in the game. With two seconds left on the advantage Sanford gave the Blues a 6-5 lead.

With 2:51 left in regulation, down by one and having scored on all three of their previous power plays, Chicago got another advantage.

At the mid-point of the power play the Hawks pulled Crawford for the sixth skater. The Blues successfully killed the penalty.

And they finished the game off with the 6-5 decision.

At least the game was entertaining. Crawford made 31 saves, many of them spectacular. His save percentage on this night was far from an indicator of how well he played.

Toews had a strong night. Chicago’s captain skated 18:44 and won 16 of 25 faceoffs with two assists.

Nick Seeler was back in the lineup after Lucas Carlsson made a good impression in his debut. Seeler skated 13:56 in the loss.

Murphy put five shots on net from the blue line. Saad led all Blackhawks skaters with six shots on net.