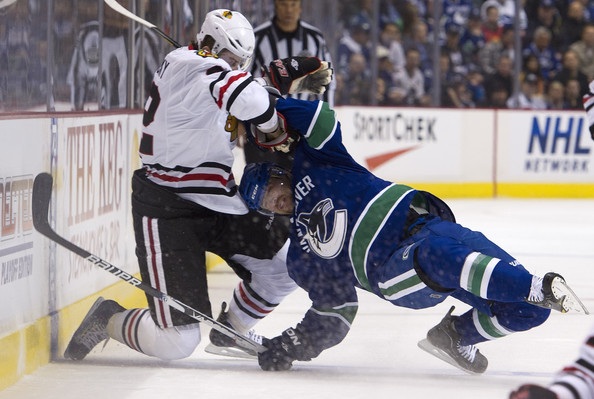 The Chicago Blackhawks started their title defense in Vancouver with a shutout loss at the hands of Roberto Luongo and the Canucks.

First, let’s name a few issues with the Blackhawks play on Wednesday night.

Duncan Keith and Brian Campbell, two of the fastest skaters in the league, looked like they had concrete in their skates on too many occasions to count. Not the best night from either one.

Chris Campoli struggled in every part of the game, and his ice time suffered.

The Canucks came out hitting, and the Blackhawks came out receiving. The physical play in the first 15 minutes was glaringly one-sided.

Other than those glaring issues, what was there to really hate about the Blackhawks performance other than the final score?

Look at the questions the Blackhawks had coming into the game.

How would Corey Crawford play? I would say two goals allowed on 33 saves – a .939 save percentage – is a pretty good answer.

How would 20-year-old Nick Leddy play? He skated 18 shifts, 12:11 of ice time, and didn’t make a glaring mistake. In fact, the Canucks took a few runs at him early, and he didn’t take the bait and make a stupid reaction play that would have landed him in the box. A good night for the kid.

Could Michael Frolik be physical enough? He led the team with six hits. Maybe Troy Brouwer and Brent Seabrook should ask him what the trick is to being physical before Friday…

In fact, of the Blackhawks in their first playoff series – Leddy, Frolik, Viktor Stalberg, Ben Smith and Jake Dowell – none of them made a major mistake. Indeed, the hustle from Smith was consistent all night, Dowell was OK at the dot (winning five of 12), and Stalberg put a few hits on people when the pace of the game slowed down.

The very simple reality on Wednesday night is that the Blackhawks were terribly snake-bitten, Luongo made a couple huge saves, and the posts bailed him out on four occasions. In a seven-game series, every shot isn’t going to hit the post; at some point, the Blackhawks will break through.

However, the bigger question for Friday might not be how the Hawks respond, but who will be on the ice to bring the response? Tomas Kopecky skated just four shifts, and left the bench early in the second period. Ryan Johnson was a target all night, and was banged up a few times.

In the final 40 minutes, the Blackhawks had more of the momentum and had more quality scoring chances than Vancouver, but just couldn’t finish.

The Canucks won Game One in 2009 and again in 2010, and lost both series. If their fans were hoping history wouldn’t repeat itself, so far, so bad for them.

13 thoughts on “Blackhawks Lose Game One in Vancouver: So What?”