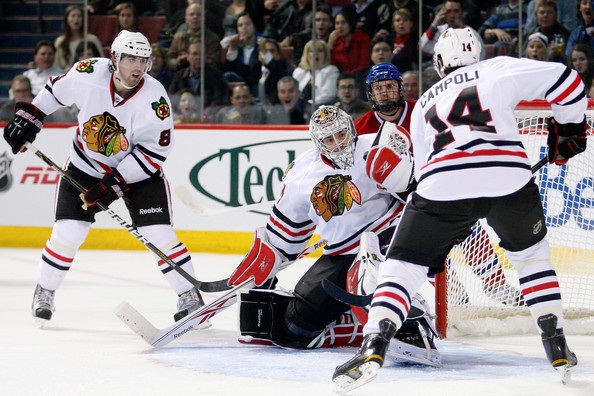 Picking up one point in Montreal wasn’t ideal, but it’s better than nothing.

The Hawks and Habs battled into an epic overtime period worthy of a great Original Six matchup, only to lose on a missile from PK Subban.

What might become the bigger loss from the game isn’t the second point, but Troy Brouwer.

Brouwer whiffed on an attempted hit and went into the boards awkwardly. He stayed down on the ice, clearly in pain and favoring his right arm. It was hard to tell if the injury was to the shoulder or forearm.

Either way, the Hawks leading hitter is doubtful for Wednesday night and has to be considered questionable at best for the weekend home-and-home with Detroit.

While Brouwer has been stuck in a tough scoring drought, he has been an effective physical force on the ice. Losing him would make a Blackhawks team that already lacks a physical presence even smaller.

How can the Blackhawks cover for a potentially long absence from Brouwer?

John Scott – hell no. Even if St. Louis plays their usual brand of physical, trying-to-hurt-someone brand of hockey, the Hawks cannot afford to waste a roster spot on Scott’s four minutes.

So, if Scott isn’t the answer, and Patrick Sharp isn’t ready to return…. ?

A few options from Rockford would include the IceHogs’ leading scorer, Jeff Taffe, or Rob Klinkhammer. Ben Smith has also seen action in Chicago this year. Could Kyle Beach be an option? Considering he’s minus-22, that’s doubtful.

With three games left, the Blackhawks are struggling to have enough warm bodies on the bench to handle three more games.