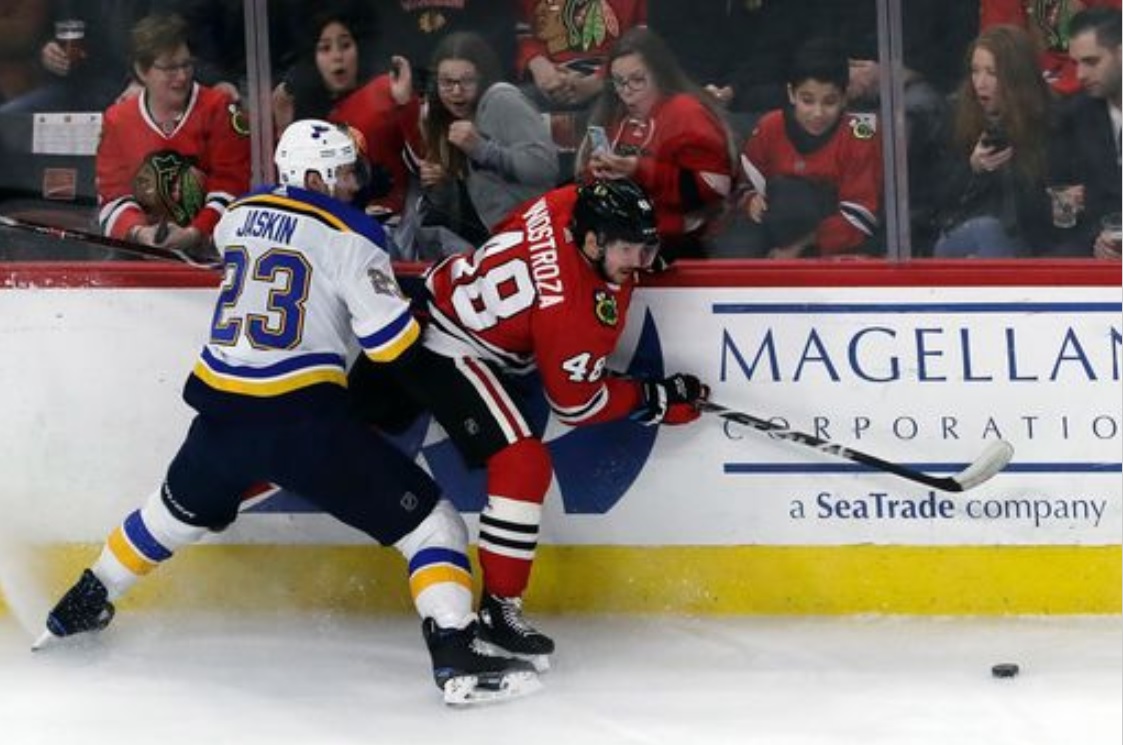 The Blackhawks hosted the St. Louis Blues in their home finale on Friday night. Certainly the schedule makers in the league office thought this game would be more meaningful for both teams than it was when the puck dropped.

After a stirring pregame ceremony honoring Stan Mikita and a nice ovation for Patrick Sharp in what appears to be his final game in the Indian head, a game started that meant everything to the Blues and… a game check to the Blackhawks.

Patrik Berglund scored the only goal in the first period. And nothing happened in the second. After 40 minutes, the Hawks were down 1-0 and had been out-shot 19-12.

Eight minutes into the third, Erik Gustafsson joined the rush and fired home his fifth of the season to tie the game.

Patrick Kane and Nick Schmaltz picked up assists on the Gustafsson goal.

Just as Hawks fans were joking that the Hawks were going to crush the Blues’ playoff hopes, St. Louis took the lead again. Berglund scored his second of the night 16 seconds after the Gustafsson goal.

Chicago just wasn’t generating many scoring chances in the third, even though there were clearly emotions on the ice and the bench when a nice video tribute to Patrick Sharp was played.

With 3:30 left, a couple Blues players took their usual cheap shots at Kane, who wasn’t pleased. There was a group hug and a commercial break. Again, very little emotion from the Blackhawks about the game that was taking place. Kane and Alex Pietrangelo sat for a couple minutes because of their discussion, and the Hawks pulled JF Berube with three minutes left in regulation for a 5-on-4 empty net scenario.

Chasing two with Kane in the box, the Hawks predictably struggled to generate much offense; they weren’t doing much with 88 on the ice on Friday evening.

Chicago’s net stayed empty when Kane and Pietrangelo left their respective boxes with 90 seconds left in regulation. The Hawks called their timeout to draw something up. Sure, why not.

The clock wound down and the Hawks successfully maintained their position in the top ten in the upcoming draft lottery.

Andreas Martinsen was physical once again, leading a light-hitting night from the Blackhawks; he more than half of the hits credited to the home team.

David Kampf did a nice job at the dot again, winning more than half of his faceoffs. Victor Ejdsell struggled, however. Schmaltz started the game between Kane and Sharp and played well again without Jonathan Toews in the lineup.