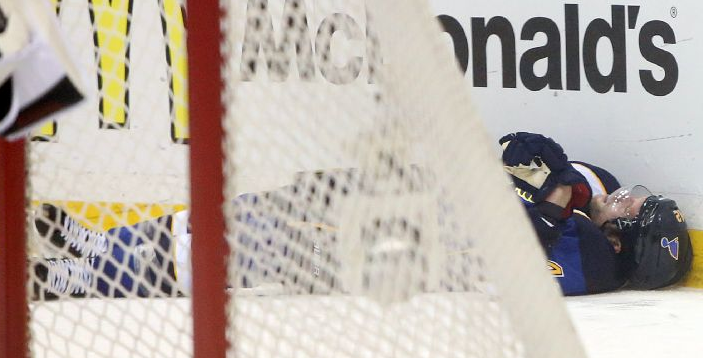 The Blackhawks played 30 minutes of bad, emotionless hockey in St. Louis on Saturday afternoon. Then they fought back and took a 3-2 lead in the first seven minutes of the third period, and controlled the action for much of the final 20 minutes.

But an enormous, illegal hit on David Backes by Brent Seabrook removed the Hawks’ defenseman from the contest and opened the door for the Blues to come back.

And they did, scoring a game-tying goal with 6.4 seconds remaining in regulation and another overtime game-winner.

Moments before Seabrook hammered Backes, Bryan Bickell was sent to the box for a questionable knee-on-knee hit on Vladimir Sobotka. The Hawks were able to successfully kill 25 seconds of 5-on-3 hockey before Bickell returned to the ice, but the Seabrook major penalty carried through the extent of regulation.

St. Louis coach Ken Hitchcock pulled Ryan Miller with 1:46 left in regulation, and Vladimir Tarasenko made the Hawks pay in the closing moments.

All three Hawks goals came from defensemen, with Duncan Keith, Seabrook and Michal Rozsival beating Miller. Brandon Saad had an assist on both third period goals, and Seabrook was credited with an assist on Keith’s goal. But his afternoon – and possibly series/season – ended early because of the hit on Backes.

The Blues converted only one of nine power plays in the game – but their one goal tied the score.

After the game, Seabrook told the media what anyone would expect: he didn’t target Backes’ head, was trying to make a play, feels bad, etc.

Corey Crawford stopped 27 of 31 in the loss, once again deserving a better fate than the final score. But goals with less than two second remaining in the first period and less than six seconds left in the third were hard to stomach.

Brandon Bollig skated seven shifts – 3:33 – in the loss. He was benched for most of the second period, but came out for a faceoff in the closing moments. Bollig and Steve Ott were assessed 10-minute misconduct penalties after the period ended, and the Hawks scored twice while Ott was in the box for the first half of the third period.

Michal Handzus once again started the game between Marian Hossa and Patrick Sharp, but coach Joel Quenneville (finally) moved Ben Smith up and that line started firing in the middle of the second period. Handzus skated exactly 17 minutes in the game, 8:28 of which was short-handed.

Hossa played a magnificent game. He was credited with a game-high eight shots on net and a game-high four takeaways.

After skating over 40 minutes in Game One, Niklas Hjalmarsson was on the ice for 25:59 and blocked a game-high six shots. Keith played 28:06 in the loss.

TJ Oshie returned for the Blues and played 25:29 in the win.

Seabrook hasn’t been suspended before, but this could be the second straight postseason that one of the Hawks’ top defensemen is disciplined by the league. Keith was suspended for one game after high-sticking Jeff Carter in the face during the Western Conference Final last year.

The series returns to Chicago for Game 3 on Monday night. Whether or not Backes is able to go will be important for St. Louis, and we’ll likely know Seabrook’s fate in the next 24 hours.