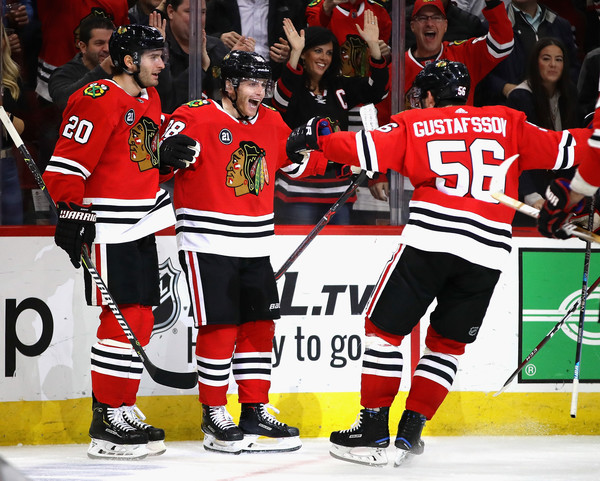 Game One of the Jeremy Colliton Era is now officially in the books.

And, 20 minutes in, Colliton may have felt like he had jumped into the deep end of the pool and needed a life raft.

Goals by Andrei Svechnikov, Jaccob Slavin (on a power play) and Phil Di Giuseppe handed Carolina a 3-0 lead in the first period. The Canes out-shot the Hawks 16-13 in the first and the team wearing the home red sweaters looked like a team that had been punched in the gut a couple days ago.

When Calvin de Haan scored 80 seconds into the second period to extend Carolina’s lead to four, the United Center faithful were understandably vocal with their displeasure.

Scott Darling looked good. Teuvo Teravainen had an assist on the de Haan goal. And nothing appeared to be any different for the Blackhawks than the team that hadn’t won in more than a week.

But as we have seen so many times in the past decade, Patrick Kane decided it was time for the offense to wake up.

Kane’s 12th of the year sparked a little life into the crowd.

Brandon Saad picked up an assist on Kampf’s second of the year, a much needed point for the forward who has struggled since returning from Columbus.

The Hawks out-shot the Canes 14-10 in the second and were able to cut the lead in half.

Nick Schmaltz scored his second of the year at tree-turdy-tree into the third to make the score an uncomfortable 4-3.

The clock ran out on the attemped comeback and the Chicago Blackhawks handed Scott Darling his first win of the 2018-19 season.

Self-inflicted mistakes were the back-breaker on Thursday night for the Blackhawks. The first half of the game was, to be kind, ugly. But the team rebounded and showed up over the final 35 minutes. Unfortunately, the hole they put themselves in was too deep to climb out.

Kane skated 27:43 and put three shots on net for the Blackhawks; he had five more shot attempts miss the mark. We’ll see how much Colliton skates him going forward, especially if the team struggles to score goals around him.

Marcus Kruger left the game early because of an injury, skating under seven minutes in the game. Andreas Martinsen was limited to 8:10 but he was credited with three important hits (note: sarcasm). And Chris Kunitz wasted 10:22 on the ice.

Corey Crawford stopped 30 of 34 in the game.