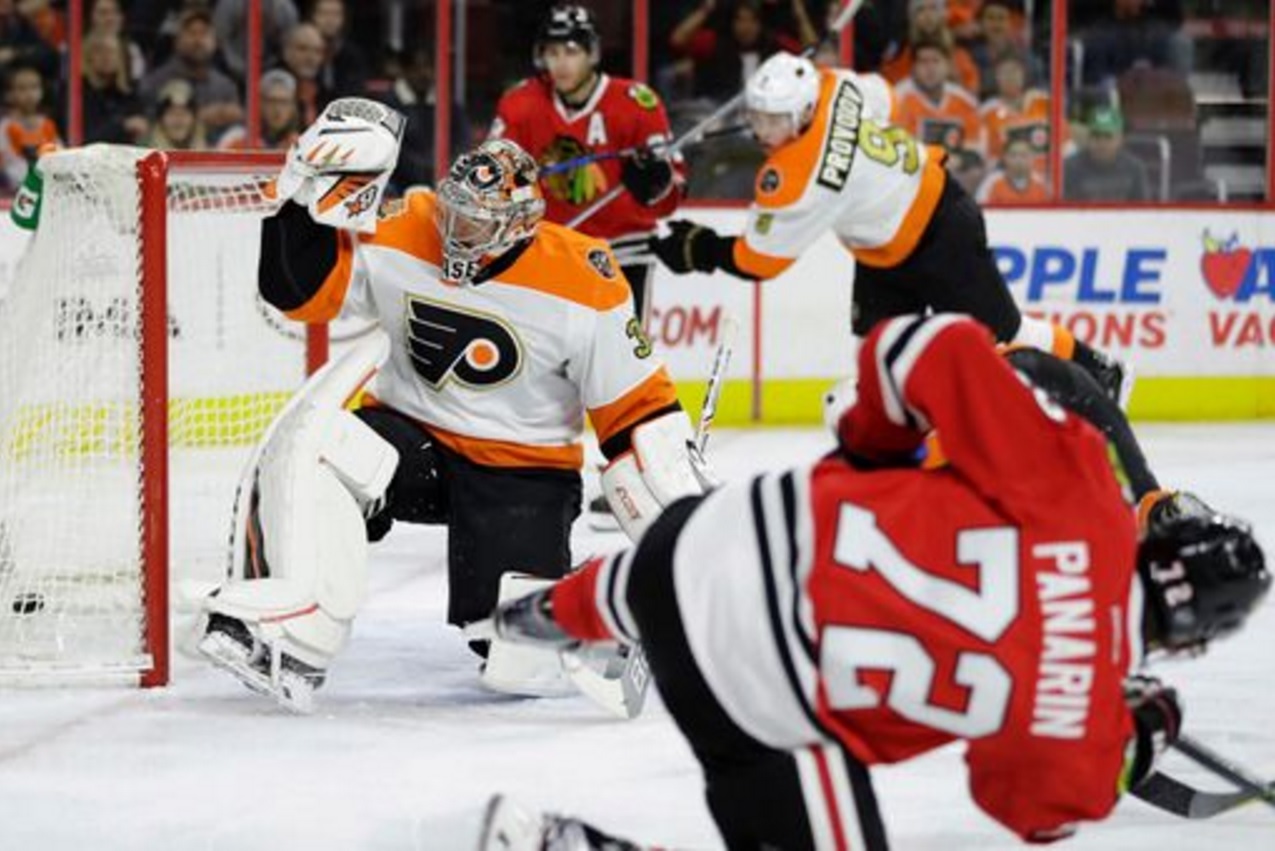 The Blackhawks arrived at the arena Saturday morning to face the Philadelphia Flyers and immediately had a surprise problem to deal with: Corey Crawford needed an appendectomy.

The Hawks sent Crawford to the hospital and found Eric Semborski, who played club hockey at Temple, to back up Scott Darling. Chicago had so little time to get the ATO worked out with Semborski that he wore Crawford’s number 50 while sitting on the bench.

It was a pretty good day at the Semborski house.

As if the Eric Semborski story couldn’t get better: Today is his dad’s birthday pic.twitter.com/xcqSavcRHJ

Returning to the lineup on Saturday was defenseman Trevor van Riemsdyk, who had been out since late October. He appeared in only his third game of the 2016-17 season in Philadelphia.

Once the game started, the Blackhawks settled into business as usual: get grossly out-shot in the first period but somehow hang onto a lead through 20 minutes.

On Saturday, the first period goal came from Artemi Panarin.

Panarin’s ninth came in a first period that saw the Hawks out-shot 16-6 by the Flyers, a trend that will absolutely need to be addressed moving forward without Crawford for the next few weeks.

At 16:38 into the second period, it appeared the Blackhawks had scored a second goal. Unfortunately, the officials – and video review – did not agree.

Chicago needed a power play but didn’t get one until 13:29 into the third period when Philly had too many men on the ice during an advantage of their own. That power play did absolutely nothing, and the lead remained two for the hosts.

With 3:27 left in regulation, the Flyers got their third power play when Vinnie Hinostroza tripped Michael Del Zotto. Coach Joel Quenneville sent Patrick Kane out with Panarin on the penalty kill while chasing two goals and they got an offensive zone draw – that Kane lost. Darling went to the bench with ten seconds left in the penalty kill – which ended successfully – as Quenneville sent out an extra forward hoping to generate some offense.

The Hawks couldn’t get a second or third goal in the final minute of regulation, and the Blackhawks winless streak in Phildelphia stays alive; Chicago hasn’t won a regular season game in Philadelphia since 1996 (thankfully they won Game 6 of the 2010 Stanley Cup Final there).

Darling stopped 27 of 30 in the loss in place of Crawford. Chicago will need to make a roster move to bring a backup netminder up from Rockford before Sunday’s game with Crawford out. To date, Lars Johansson has a .911 save percentage and 2.63 goals against average in 16 appearances with the IceHogs.

It is also worth noting that the Blackhawks have eight healthy defensemen on the roster with TvR active; Gustav Forsling joined Michal Rozsival in the press box on Saturday. Michal Kempny skated 15:52 and led the Blackhawks with five hits; he also blocked two shots. TvR skated 14:46 in the game with one shot on net.

Tyler Motte skated a team-low 8:50 but finished tied with Niklas Hjalmarsson for the team lead with three blocked shots. Artem Anisimov won 13 of 22 at the dot and Marcus Kruger won seven of 15 with the Hawks still missing Jonathan Toews. Hinostroza won only one of nine.