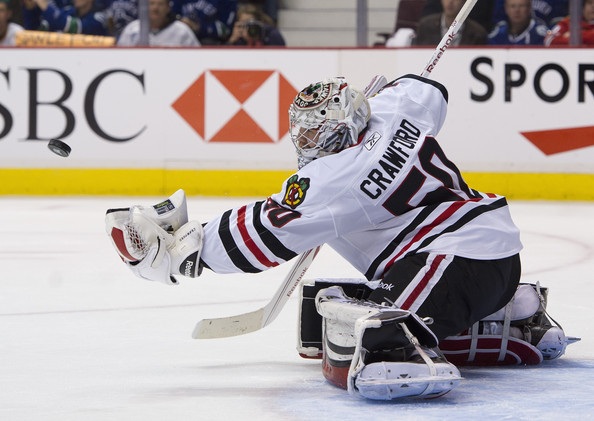 Fans of the Vancouver Canucks and Chicago Blackhawks were treated to arguably the greatest series between a 1 and 8 seed in the history of the NHL. Unfortunately for Chicago’s fans, the final horn ended with the score favoring the wrong side.

A heartbreaking whiff on a bouncing puck by Chris Campoli gave Alex Burrows a one-on-one opportunity and he, unlike so many of his teammates and himself on an earlier penalty shot, beat Corey Crawford for the game-winner.

Crawford was incredible the entire night, outplaying Roberto Luongo and keeping the Hawks in the game despite a mediocre night from most of Chicago’s defensemen. He kept 36 of 38 shots out of the net (.947 save pct) and was, by far, the best player on the ice in the game.

But a missile from Burrows was the difference. He was responsible for both of Vancouver’s goals.

Despite dominating the action for most of the game, the Canucks weren’t able to extend their lead beyond one because of Crawford’s superior effort. The Blackhawks were able to hang around just long enough to drag a trick out of their history – a late short-handed goal to extend a playoff game.

It wasn’t a five-minute major this time, but with just over three minutes left in regulation, Duncan Keith was called for hooking Burrows. Just as they did in Game Five against Nashville in the first round last year, the Hawks looked to generate offense while short-handed in the closing moments and were successful.

Jonathan Toews scored his first goal of the postseason with 1:56 left on the clock to tie the game.

However, early in overtime the whistle blew again for a play involving Keith and Burrows; this time, however, it was Burrows heading off for holding. The Hawks got one excellent look, when Toews found Patrick Sharp wide open on the back side, but he wasn’t able to put the puck past Luongo.

Burrows returned to the ice, and the rest is history.