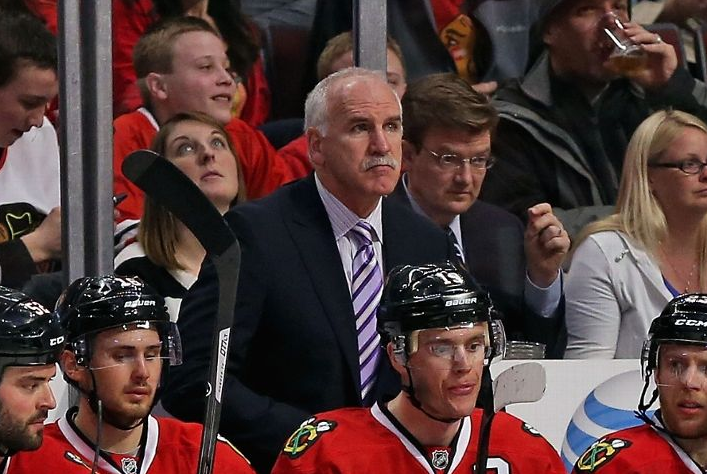 Michal Handzus played in his 1,000th game in the NHL. Coach Joel Quenneville won his 700th in the NHL. Patrick Sharp collected his 300th assist. And the Blackhawks moved back into second place in the Central Division with a dominant 4-0 win over the first place St. Louis Blues. The Hawks were without Brandon Saad from the start, and without Patrick Kane for the second half of the game on Wednesday night. Kane went down in the middle of the second period and struggled to make his way to the bench before leaving for the dressing room. He skated only 10 shifts – 7:54 – but was credited with an assist on Duncan Keith’s first period goal.

Keith’s goal held up as the game-winner as Corey Crawford played an excellent game behind one of the better defensive efforts of the season from Chicago. Crawford was forced to stop only 23 shots in the game, and was up to the task to earn his second shutout of the season.

In front of Crawford, the Hawks blocked 11 shots and controlled the flow of the game throughout. Keith led the way with four blocks and two hits with his fifth goal of the season, a power play marker at 19:05 into the first period.

Andrew Shaw scored for the second time in as many nights to give the Hawks a 2-0 lead in the second period. After a rough stretch where Shaw had only five points in 18 games to start the 2014 calendar year, he now has seven points (four goals, three assists) in nine games in March.

In the third period, Peter Regin made a great play to get the puck to a wide open Marcus Kruger for the Hawks’ third goal, and Ben Smith scored a power play goal less than three minutes later to end the night for St. Louis netminder Ryan Miller. Miller allowed four goals against 27 shots before he was removed with just over 12 minutes left in regulation.

Nick Leddy and Sharp had two assists each in the game. Sharp’s secondary assist on Keith’s goal in the opening period was the 300th of his NHL career, one of many milestones achieved as the Hawks rolled the Blues.

Chicago’s power pay, which had struggled recently, scored twice in three opportunities. The Hawks penalty kill successfully took care of all three of the Blues advantages on the night as well.

Kruger won 10 of 14 faceoffs and Jonathan Toews won 10 of 18 in the win. Brandon Bollig once again led the way with six hits. And Bryan Bickell played another strong, physically-engaged game. Since being moved up to the Hawks’ “second” line with Kane and Smith, Bickell has played a more confident game. He was credited with two hits and three shots on net on Wednesday night.

Before the third period ended, NBC was already reporting that Kane is expected to miss two weeks with an ankle sprain. The Chicago Tribune’s Chris Kuc reported earlier in the period that the injury was “not serious,” but Quenneville indicated Kane could miss around three weeks. Basically, Kane’s regular season may have ended on Wednesday night.

With Winnipeg defeating Colorado in overtime, the Blackhawks moved one point ahead of the Avs and into second place in the Central Division.