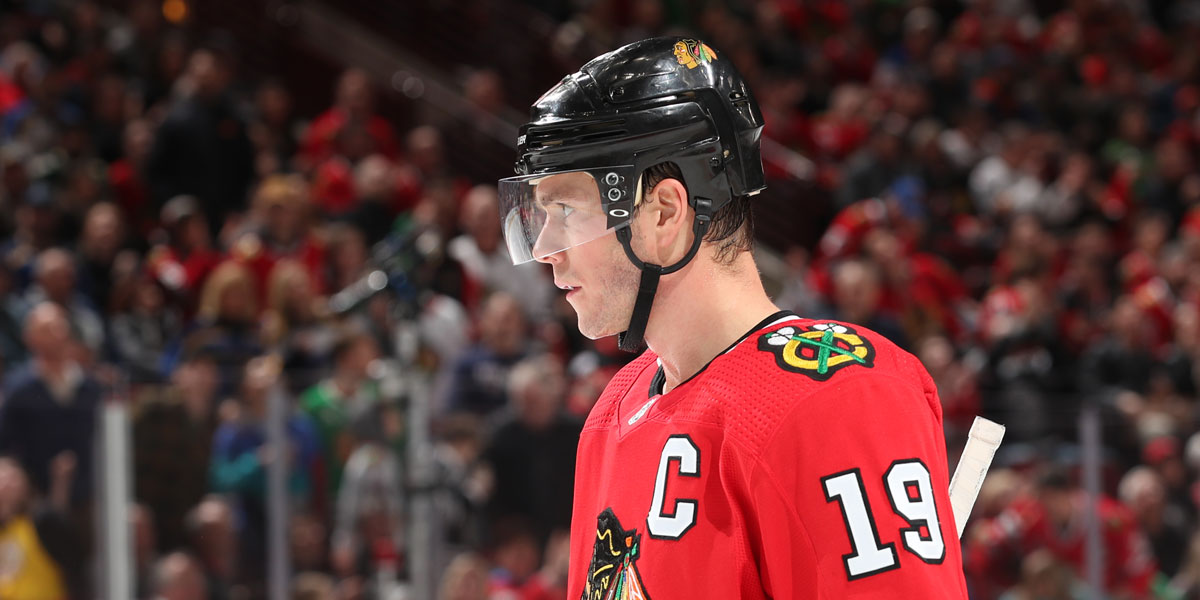 When realistic Blackhawks fans (and players) tried to chart a path to the playoffs, Sunday evening’s game against the St. Louis Blues was one of the games where many pointed to there being an acceptable loss.

Then the Hawks crapped the bed in Detroit on Friday night, and the importance of a home game against the defending champs took on an entirely new importance.

Unfortunately for the Blackhawks, St. Louis’ fans travel. And they were out in force at the United Center on Sunday, noticeably chanting “Let’s go, Blues!” throughout the game. For a front office that’s as image-aware as the Blackhawks’ current group is, having a national audience hear that couldn’t sit well.

Jake Allen got the start for St. Louis. The last time the Blackhawks were shutout at home was by St. Louis – with Allen in net – on Dec. 2. And the Hawks didn’t look like a team pushing for a postseason berth early.

The second period got a little more interesting. First, enormous respect to the Blackhawks for a tribute video they produced and showed during the Kiss Cam television timeout during the second period. Anyone who has been to a Hawks home game in recent years knows the old couple that was almost always featured during Kiss Cam. This montage found all of the dust in the room.

Earlier this year, Earl Deutsch–a face familiar to many #Blackhawks fans for his frequent Kiss Cam appearances–passed away at the age of 93.

Earl's wife and best friend of 70 years, Roselee, along with other members of their family, joined us for tonight's game. pic.twitter.com/cwycVMthWi

The Hawks got two power plays in the opening 11 minutes of the second period but failed to do anything with them. In fact, the Hawks had 7:45 of power play time in the game before they were able to generate a single shot on net while having the advantage. Chicago’s power play has gone back to dumpster fire level awful at the worst time possible in the season.

Robert Bortuzzo got St. Louis on the board at 6:41 into the second period. That would be the only goal in the second even though the Hawks out-shot the Blues 13-10 in the period.

The game took a hard turn 15 minutes into the second. Oskar Sundqvist caught Adam Boqvist in the face with a fist/the butt of his stick, the second time Boqvist got his high in the game. As Boqvist was down on the ice a line brawl broke out. Drake Cagguila dropped the gloves with Vince Dunn. Cagguila held his own for a bit, standing up for Boqvist; Dunn ended the fight with a couple hard rights to Cagguila’s face.

The fight showed how much the roles in the Central Division have reversed. Now, it was the Blackhawks who were chasing a cheap fight trying to create a spark while the defending champs on the other side were able to play a heavy game and win the fights that did start. Chicago was getting handled on every inch of the ice.

Before the third period began, the Hawks announced Boqvist wouldn’t return as he was under further evaluation; he missed Friday night’s game in Detroit because of a wrist issue but a couple shots to the head in this game were the cause for him getting some additional attention. Cagguila was also done for the night because of a right hand issue. He missed time earlier in the year because of a concussion and took a couple hard shots from Dunn.

So the Blackhawks were chasing one with two important parts of the roster out for the third period.

Alex Pietrangelo extended the Blues’ lead to 2-0 at 5:37 into the third period and the Blackhawks looked terribly flat.

Chicago failed to register a shot on net in the opening 12 minutes of the third period while chasing two. The Hawks weren’t able to sustain any pressure in the offensive zone and didn’t have any presence in front of Allen the entire night.

As more “Let’s go, Blues!” chant came down from the stands the Blackhawks pulled Corey Crawford with three minutes left in regulation for an extra attacker. St. Louis nearly scored into the empty net within seconds of Crawford leaving but the shot was wide left; but the Hawks continued to struggle to sustain puck possession in the offensive zone.

Again, this was a Blackhawks team that was openly talking about making a playoff run. They were down two goals and had three shots on net with 150 seconds left in regulation.

Jeremy Colliton used his timeout with 1:13 left in regulation, still down two. That didn’t matter. The final 73 seconds ticked off the clock and the Blackhawks were shutout on home ice.

If you paid for playoff tickets, roll that money over to next year. Because the postseason ain’t happening, folks. The final nail for the coffin was the loss in Detroit. The hammer for that nail was Sunday against the Blues.

Cagguila picked up four hits in 4:39 before leaving with his “hand” injury.

Boqvist was credited with one blocked shot in 10:56 before he left for further evaluation. After the game, Colliton confirmed he is in concussion protocol.

Ryan Carpenter skated 8:43 and won two of three faceoffs. He was credited with a team-leading five hits.

Chicago’s power play was 0-4. The Hawks finished the night with 29 shots on goal and none of them went in.

The all-female broadcast team for NBC did a tremendous job calling the game. Hopefully this opens the door for more women playing a prominent role in hockey broadcasts at every level.