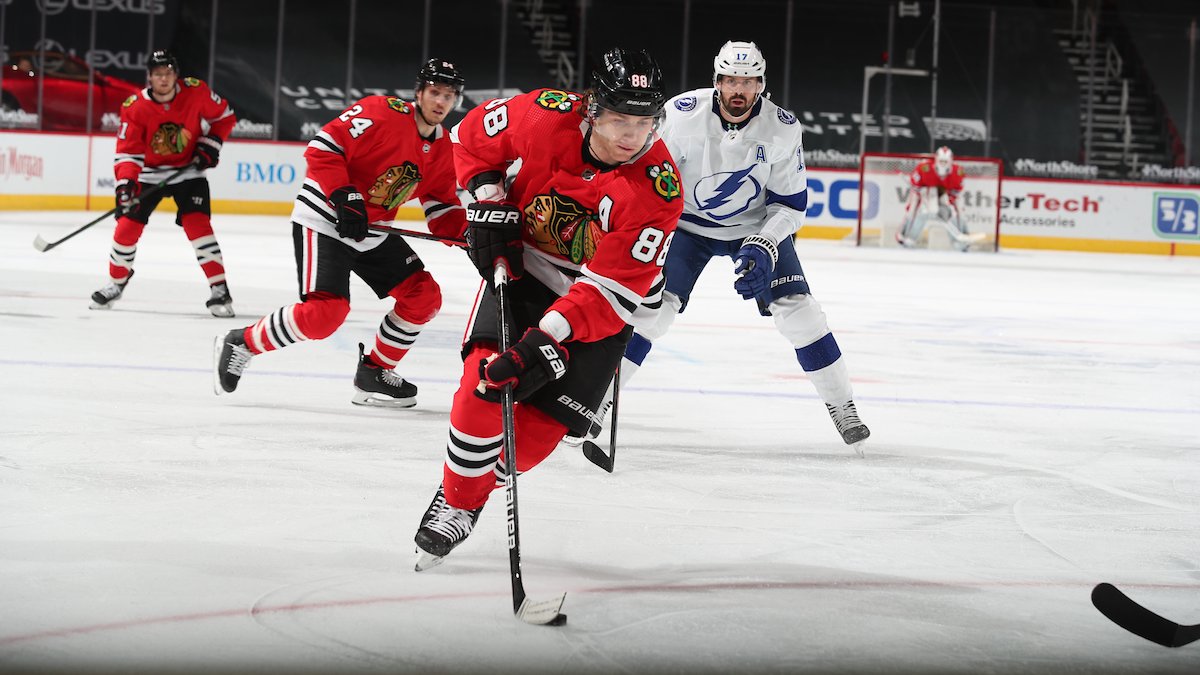 The Blackhawks have had a nice season so far. They looked terrific in February and started March in a playoff spot.

But looking at the games on the calendar in March, it’s a totally different game coming soon. Starting Thursday night against Tampa, the Hawks were looking at about three weeks to know exactly how good they really are at this point.

If Thursday night’s game is any indication, the Blackhawks have come a long way since allowing 10 goals in two games against the Lightning to start the season.

Andrei Vasilevskiy came into Thursday’s game the front-runner for the Vezina Trophy, riding three consecutive shutouts. Could the Hawks beat him once? Enough to win the game?

It took more than 27 minutes in the game but Ryan Carpenter ended the shutout streak with a short-handed goal early in the second period.

Brandon Hagel picked up the assist on Carpenter’s goal.

Patrick Kane and Connor Murphy picked up the helpers on DeBrincat’s goal.

The second period might have been the best single period of hockey the Hawks have played this year. The effort was complete, every shift was intense and it showed on the scoreboard.

Unfortunately, the start of the third period was the opposite.

Chicago had a power play to start the third period. It was lazy, the passing was bad and it led to a goal for Tampa. Anthony Cirelli scored a short-handed goal 64 seconds into the third period.

The sloppy play continued and led to Steven Stamkos tying the game 2:55 into the third.

Tampa grabbed the momentum and held it for most of the rest of the third period but the Blackhawks hung in. At the end of 60 minutes of hockey the game remained tied.

The overtime period was back-and-forth. In the middle of OT both teams had great shots hit posts. Lankinen made a few great saves… but didn’t get the last one.

Victor Hedman threw a shot on net as time was about to expire. It got through. And video replay showed the puck clearly crossed the line with 0.1 on the clock, giving the Lightning an overtime game-winning skate-off(?) goal.

What we wondered coming into Thursday night’s game was whether or not the Blackhawks could hang with the defending Stanley Cup champions. With three games in four nights against Tampa before heading on a tough road trip, this was the start of the toughest stretch of games on the schedule for the Hawks.

What we learned is that the young Blackhawks have come a long way from the squad that got its ass kicked in Tampa to open the season. They competed hard and took the game to within 0.1 seconds of a shootout.

One point in the standings is a good way to start this three-game set, but the way the team played in the second period makes it hard to take the loss.

Lankinen would love to have that last shot back, but he had a good night. He saved 31 of 34 in the game and made a few really good stops in the third and overtime.

DeBrincat’s goal was the 99th regular season goal of this career.

The faceoff circle continues to be an issue. Chicago lost 60 percent of the faceoffs on Thursday night, with Pius Suter winning only three of 15 in the game. David Kampf won 11 of 17 in the game, however.