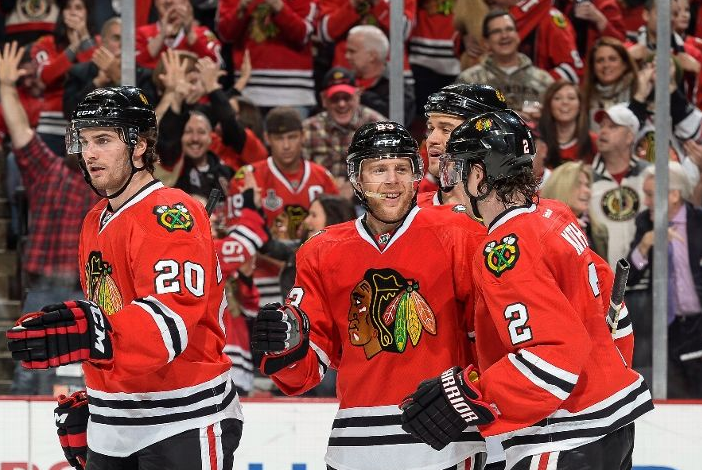 The Blackhawks welcomed the hottest team in the NHL into the United Center on Friday night, and played perhaps their best game of the 2013-14 season to earn a 4-2 victory. In the process, three Blackhawks ended personal droughts. Marian Hossa played a tremendous game, scoring two goals with two blocked shots and four takeaways. His first goal came in the first period on a short-handed breakaway after a pretty pass from Niklas Hjalmarsson to Jonathan Toews started the rush. Hossa’s second was into an empty net in the game’s closing minute, but with Anaheim making a push.

Hossa’s short-handed goal was the 28th of his career, which is tied for the active lead in the NHL. He now has 19 goals on the campaign.

Kris Versteeg scored the Hawks’ second goal of the night, also in the opening 20 minutes. The puck popped up in traffic in front of the net, and Versteeg was able to tap it past Jonas Hiller for his ninth of the year.

The goal was Versteeg’s first since December 27.

Unfortunately, Versteeg’s night was cut short by a big hit from… Bryan Bickell. With a delayed penalty coming, Bickell and Versteeg pursued a puck behind the Ducks’ net at the end of the second period. The two collided, and Versteeg stayed down for a few moments. He did not return to the bench for the third period, and will be re-evaluated on Saturday (upper-body).

At 10:13 into the third, Bickell scored his seventh goal of the season, and first since December 23.

However, Ryan Getzlaf and Kyle Palmieri scored 53 seconds apart in the third to bring the Ducks back to within one goal with five minutes to play in regulation. Corey Crawford was able to hang on and earn the victory, with Hossa adding the insurance goal to close the books for the night.

It was Crawford’s first victory since returning from injury.

Crawford only faced 21 shots in the game and the Hawks blocked 10 more as a team in a strong effort across the board. There were a few frustrating moment, including a Hjalmarsson turnover that led to Getzlaf’s goal and Palmieri’s goal was weak on Crawford’s part, but Chicago played dominant hockey for most of the night.

Bickell scored, but was limited to 8:41 on the night. Brandon Bollig was credited with seven hits in 12:23, and resisted the temptation to fight Corey Perry after the all-star boarded Marcus Kruger late in the second period. Hossa led the team with eight shots on net as the Hawks out-shot the Ducks 35-21.

Jonathan Toews was credited with an assist on Hossa’s short-handed goal and won 14 of 23 faceoffs. Hjalmarsson had two assists and two blocked shots in the game.