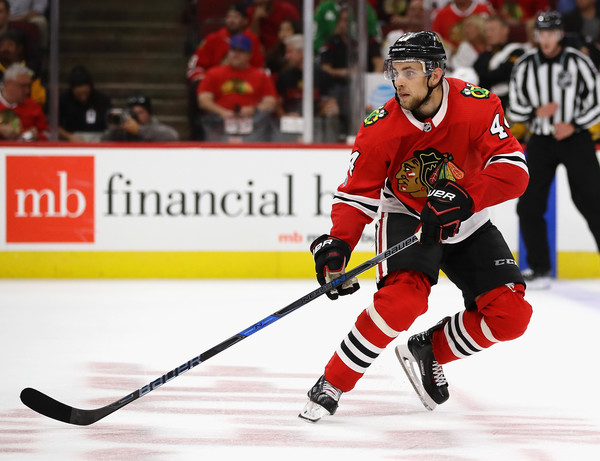 Blackhawks coach Joel Quenneville has his blender back in action at the morning skate on Tuesday as the Blackhawks try to shake their way out of a prolonged struggle to begin the season.

Joel Quenneville doesn't sound or look very happy as he ends practice and leaves the rink.

The more intriguing rearrangement appears to be coming on the blue line. Here’s what the Hawks had in practice on Tuesday:

Quenneville has been pleased with Franson’s play, but efforts to keep all eight defensemen on the NHL roster in the mix has left him in the press box more nights than not. Franson has only appeared in three games but has two assists.

Kempny had two assists in the Hawks’ most recent loss and has three helpers in nine appearances this season.

Rutta has been terrific, but has skated primarily on the right side. Moving him to the left side would help; Gustav Forsling has struggled at times and an upper-body issue will likely keep him from being available for Wednesday night’s game against Philadelphia.

Quenneville is also playing with his forward lines as well.

Saad moving to the line with Schmaltz and Kane makes that line more intriguing, and DeBrincat will get some more run with Toews but on the captain’s left side.