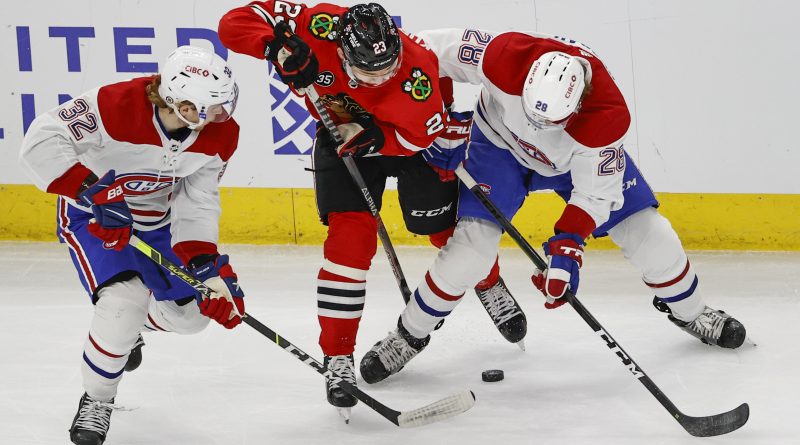 In the last week, the Chicago Blackhawks:

Chicago celebrated the end of one career and the beginning of another with the Habs in town. Andrew Shaw, whose career was spent between Chicago and Montreal, was honored before the game. And Lukas Reichel, the best forward prospect in the organization, made his NHL debut.

The Hawks were without both Kirby Dach and Dylan Strome, who were put in COVID protocol before the game. They got Brandon Hagel back and got their first look at recently acquired Sam Lafferty, both of whom were activated out of protocol. Erik Gustafsson and Jakub Galvas were in on the Hawks’ blue line with Jake McCabe and Seth Jones still in protocol.

So lots of moving pieces for the Blackhawks, but Montreal was flying into Chicago after getting beat pretty soundly in Boston on Wednesday night.

The first period was what you wanted from the Hawks. They out-shot the Habs 13-3, looked sharp and controlled the play. Jonathan Toews set up Dominik Kubalik for the game’s first goal and Chicago took a 1-0 lead to the room.

The second period gave us a 20 minutes microcosm of the 2021-22 season for the Chicago Blackhawks. For as good as they looked in Vegas and Columbus and the opening 20 minutes of this game, they completely crapped the bed in the second period.

Montreal controlled the flow of the period and Jeff Petry tied the game at 12:41 into the second period. Almost 18 minutes into the period, Alexander Romanov put a big hit on Lafferty. It looked like a clean hit, but a big one. And Ryan Carpenter decided to play the role of Andrew Shaw on the night Chicago celebrated 65. He jumped Romanov and the two dropped the gloves. When the officials broke up the fight, Carpenter raised his hands to get the crowd excited as Shaw used to do.

Mike Hoffman scored 31 seconds into the resulting power play to give Montreal the lead.

For good measure, the Hawks were short-handed a third time late in the period when the puck left the rink. The Hawks were able to kill that penalty, but the second period was a disaster for Chicago.

Montreal out-shot the Hawks 17-6 in the second period and took a one-goal lead to the third period.

But the Habs are where they are in the standings for a reason, and they gave the Blackhawks chances early in the third. Petry did the Hawks a solid and took a bad penalty two minutes into the third and the Blackhawks made the Habs pay. For the first time in more than a month, Patrick Kane scored a goal!

Smoke em if you got em, folks. 88 found the back of the net.

With 3:10 left in regulation and the game still tied at two, Kane took a high stick to the chin and got the Hawks’ a much-needed power play with Laurent Dauphin, one of Montreal’s more frequent penalty-killing forwards, in the box.

The power play did nothing.

And regulation came to a close without either team breaking the tie, so we headed to overtime. For the 12th time in 36 games, the Canadiens were picking up a point in the standings.

Reichel had three shots on net and skated 15:55 in regulation. He lost all three of his faceoff attempts, but the Blackhawks haven’t drafted a player since… Marcus Kruger… who won faceoffs consistently in Chicago so that wasn’t a shock.

Montreal won the faceoff in overtime and didn’t even try to shoot the puck… but kept control of it for 90 seconds. Philipp Kurashev did a marvelous job of receiving a pass with about 2:40 left in the overtime and attacked the net. He was mauled by Hoffman and was going to get a penalty. However, the puck clearly crossed the line as the bodies crashed into the net and took it off its spot. The league dialed up the on-ice officials for a video review to determine if the goal would count.

The call on the ice was no goal. Replays clearly showed the puck cross the line as the goal was moving. So we patiently waited for the decision of the war room.

The review determined the puck crossed the line legally and it was a good, legal goal.

Then the official held a single finger in the air. “However…” we had a second lengthy review to determine if Kurashev was offside when he received the pass that put him off to the races. Because they couldn’t look at both points of interest at once, they now had to go back and look at it again.

The officials determined Kurashev had control of the puck and the good goal counted. The Blackhawks won 3-2 and Montreal was understandably pissed.

Kurashev had a good night and deserved a goal at some point. Two long reviews gave him the game-winning goal. And what looked like a disaster in the second period turned into an awkward overtime victory.