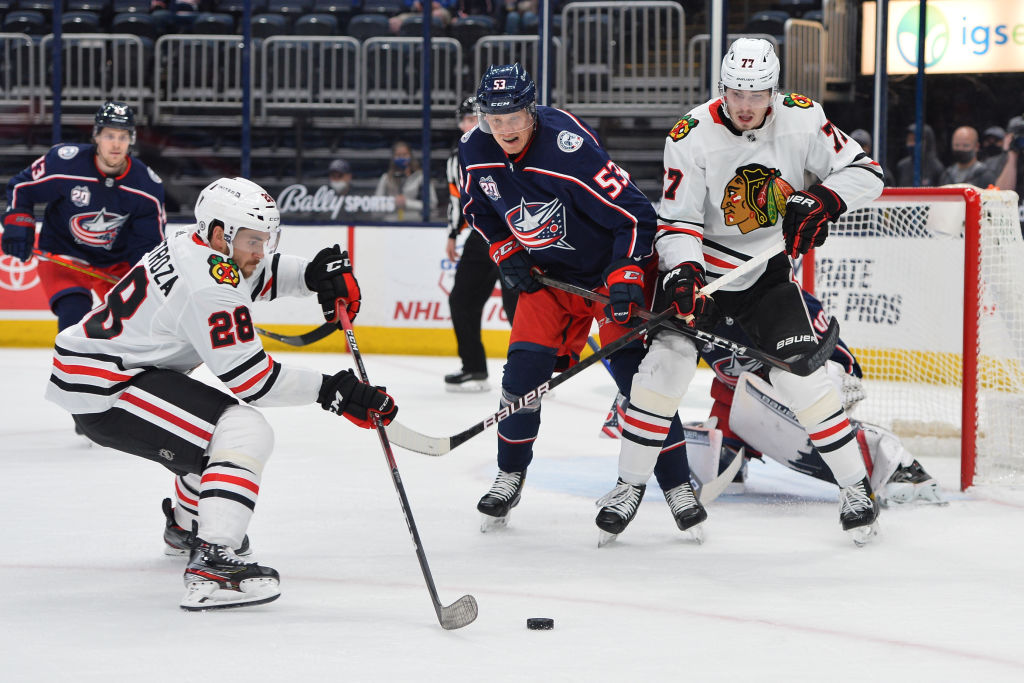 With the NHL trade deadline coming on Monday, the Blackhawks went into Columbus with player movement on the minds of both clubs. Chicago sat forward Mattias Janmark, an “organizational decision” in the team’s last game before the deadline. Columbus traded David Savard to Tampa in a three-team deal hours before the puck dropped.

Dallas had already won, so Chicago’s lead for the fifth spot in the division was disappearing. The Blackhawks needed to get off to a fast start against a Blue Jackets team that was banged up and was without a few players.

They did the opposite.

Michael Del Zotto got Columbus on the board 63 seconds into the game, sneaking a puck through Kevin Lankinen. Cam Atkinson doubled the lead at 3:13 and coach Jeremy Colliton burned his timeout to let his skaters know they sucked.

Colliton’s conversation was a huge catalyst for the game turning in a completely different direction. An extended power play that included 38 seconds of a two-man advantage paved the way for a comeback.

Alex DeBrincat sniped home his 21st of the season in the closing seconds of the second Columbus penalty to cut the lead in half.

Patrick Kane and Calvin de Haan were credited with the assists. Kane’s dominance of the Blue Jackets continues.

Seven minutes later Carl Soderberg crammed a rebound into the net to tie the game.

Soderberg’s seventh of the season came with assists to David Kampf and Ryan Carpenter.

The final three minutes of the first period came and went without another marker on the board and the teams headed to their respective rooms tied at two. After an ugly start, the Blackhawks rebounded with a strong final ten minutes.

Chicago out-shot Columbus 9-5 in the first period and Lankinen settled down after the two early goals.

The Hawks came out to start the second period with the same energy that ended the first. Three minutes into the period Wyatt Kalynuk unloaded from the point and it snuck through the goaltender and barely cleared the line for Kalynuk’s first career NHL goal.

Columbus challenged the goal because Torts felt Brandon Hagel got a piece of his goaltender on the way by before the shot arrived. The officials reviewed that the puck had fully crossed the line and then the challenge. The goal held up through both video reviews and Chicago had a 3-2 lead.

Wyatt Kalynuk is the fourth #Blackhawks rookie to score his first career #NHL goal against the Blue Jackets this season.

During the second period, Calvin de Haan disappeared down the tunnel. He wasn’t seen again during the period but had two assists in the game before leaving.

The line of Debrincat, Kirby Dach and Dylan Strome put together a gorgeous rush 16 minutes into the second. DeBrincat dropped the puck to Dach in the middle to set up Strome with a beautiful pass and Strome handled the business end. Chicago’s lead was 4-2.

Chicago just needed to avoid the dreaded late-period goal against and it almost happened. Columbus put a couple dangerous shots on net from close inside the final 20 seconds of the period but Lankinen was up to the task.

At the end of two, Chicago had a 28-12 shot advantage. Perhaps more importantly, the Hawks won 58 percent of the faceoffs in the opening 40 minutes of action.

Unfortunately de Haan wouldn’t return for the third period. The team said he was dealing with a hip pointer.

The play in the third period absolutely favored the Jackets but Lankinen made big save after big save to keep the lead at two. The Hawks were playing more like the first ten minutes than the middle 30 and Columbus was taking advantage. Thankfully, Chicago’s netminder was on his game.

Chicago’s fourth line did a great job cycling the puck behind the net and Soderberg got hit from behind to take a penalty. Lankinen went to the bench with the delayed penalty and the Blackhawks didn’t give up the puck for almost a full minute of ice time before Columbus stopped the clock with 3:35 left in regulation and the Hawks leading by two. The composure shown by the Hawks to happily kill clock was terrific and needed.

The Blackhawks would have two minutes of power play time late. They didn’t put much pressure on Columbus with the advantage, again opting to take valuable time off the clock.

Columbus eventually got their goalie off with a minute left in regulation and they took advantage of the extra skater. They got the puck in deep and the Hawks struggled to get control of the puck. Patrik Laine unloaded form the circle and cut the lead to one with 49 seconds left in regulation. Torts took his timeout following the goal.

The Hawks were able to keep the puck away from the net for the remaining time in regulation and escaped with a one-goal lead.

Colliton’s timeout was huge and his team rallied to take two big points.

Lankinen stopped 23 of 26 in the victory. He was huge in the third period.

Kane led the Hawks with six shots on net in 23 minutes of ice time. DeBrincat (one goal, one assist) and de Haan (two assists) were the only Blackhawks with a multi-point night.