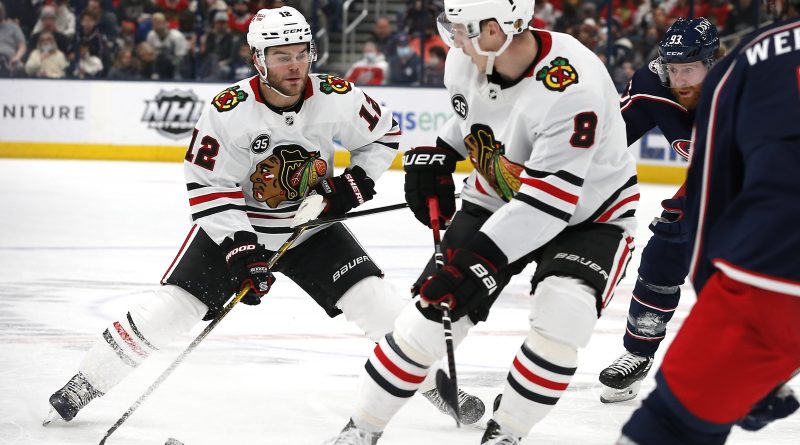 Tuesday night was supposed to be another reunion. But Seth Jones did not return to Columbus; instead, he was placed in COVID protocol before the game, where he joined Jake McCabe.

So the Blackhawks had to find a couple young defensemen to fill their spots against a Blue Jackets team that was celebrating Adam Boqvist’s 100th career regular season game.

Wearing No. 76 in white was Jakub Galvas, making his NHL debut. Ian Mitchell also got into the lineup for Chicago, but it was Galvas who was impressive early and got on the ice often. Galvas was on the ice with the first unit of Chicago’s power play when they got an opportunity in the first period. Not bad, kid.

By the time the Blackhawks got their first advantage of the opening period the score was already tied at one. Boone Jenner scored at 12:51 to give Columbus a 1-0 lead but the Hawks fired back quickly. Alex DeBrincat received a nice pass from Riley Stillman and tied the game just 24 seconds later.

At the end of the first period, each team had eight shots on net and both teams had one goal on the board. The Blackhawks had roughly half of a power play carrying over to start the second, however.

The advantage that started the second period was ugly, unfortunately. And then the Blackhawks took a couple penalties, slowing their momentum and giving a mediocre Columbus power play the opportunity to grab the lead.

And the Blackhawks were able to grab the lead at 15:10 when Calvin de Haan found the back of the net.

Philipp Kurashev and MacKenzie Entwistle picked up the assists on de Haan’s first of the year.

The official scorer had the shots at 8-3 in favor of the Blue Jackets in the second period but one of those three Chicago shots was the difference maker.

Chicago had a much better start to the third than they did in the second and were able to get the all-important next goal to build their lead to two. A pressing passing sequence ended with Connor Murphy ripping a shot home for his third of the season — and Chicago’s third of the night.

Jonathan Toews and Patrick Kane picked up the helpers on Murphy’s goal.

With 2:58 left in regulation, Emil Bemstrom boarded Riley Stillman in the corner (dangerously) and went to the box, giving the Blackhawks a power play with a two-goal lead for almost the rest of regulation if they didn’t score.

So of course the Blackhawks give up a short-handed goal.

An awful turnover found Gustav Nyqvist who took off the other direction and beat Marc-André Fleury with 15 seconds left on the Hawks’ “advantage.” Now it was a one-goal game with 81 seconds left in regulation.

A soft clearing attempt popped up in the neutral zone but DeBrincat was shot out of a cannon (maybe after Columbus’ goal?). He beat all of the Jackets to the puck, rifled a shot at the empty cage that was wide but he was able to tap in his own rebounds for his second goal of the night and Chicago’s fourth of the night.

Final score: 4-2 Blackhawks, and a road trip that started with a steaming pile of crap effort in Arizona ends with wins in Vegas and Columbus.

Fleury has been terrific over his past two games. He stopped 24 of 26 in Tuesday night’s victory.

Galvas was really good. He finished second among Blackhawks’ defensemen in ice time (23:41) and was credited with one shot on net and two blocks. He spent 6:53 on the power play and 1:51 on the penalty kill in his debut.

Chicago’s defensemen combined for 13 blocked shots in the game; five of the six blueliners had multiple blocks with Stillman failing to register a one somehow in 22:26.

Dylan Strome won eight of 12 faceoffs to lead the Blackhawks. Jonathan Toews won seven of 13 while Ryan Carpenter (four of five) and Kirby Dach (four of six) were also above .500 for the night.