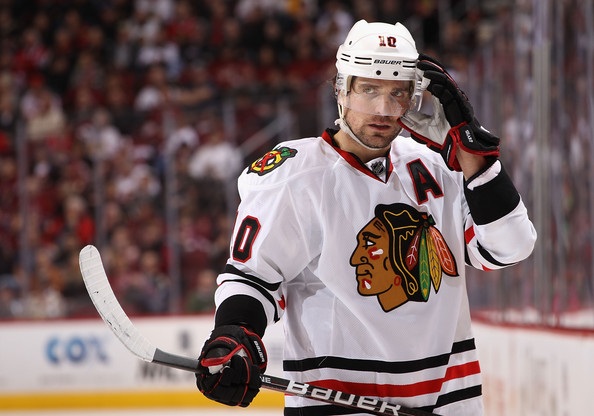 In fairly surprising news on Friday morning, the Blackhawks announced that Patrick Sharp has been placed on LTIR and forward Phillip Danault has been recalled from Rockford.

This news is especially intriguing with Andrew Shaw missing Thursday night’s game with an upper-body injury. Danault, 21, has 10 points (three goals, seven assists) in 14 games with the IceHogs to open the 2014-15 season. LTIR forces the Blackhawks to keep Sharp out of the lineup for 10 games or 24 days; Sharp left with an injury on Nov. 4 at Montreal. Since Sharp went down, the Blackhawks are 4-2-0 and have scored 25 goals over the six game stretch.

The Blackhawks have indicated Friday that Sharp is not expected to miss any more time than initially indicated when he went down.

Earlier this season, Blackhawks GM Stan Bowman spoke about placing players on IR in an interview for the team’s website.

It’s really out of necessity; you don’t get any benefit putting them on IR unless you need to do it. The rules are: You can have 23 players on your roster. You dress 18 skaters and two goalies, so you can have three players that don’t dress for the game. So until you get to the point where you have more than three players that can’t dress – whether they aren’t healthy or injured – there really is no benefit to putting them on IR. Right now we have Sharp and Carcillo, and the [scratch in our] last game was Rozsival. If we need to bring someone else up, we have to put someone on IR, and our candidates are the injured players. It is a procedural thing. You can have 23 healthy or available players, and as of now we have 23, so there is no need to do that transaction.

The IR is simply a roster spot and has nothing to do with a salary cap. Once you put a player on IR they have to be on for seven days, and you can to do that retroactively. Long-term injury does have salary cap ramifications. You have to miss 10 games and 24 calendar days, and if that’s the case then you can declare a long-term injury, and at that time that player’s salary is able to be replaced at the equivalent rate.

Chicago plays the second game of their annual Circus Trip on Saturday night in Edmonton.