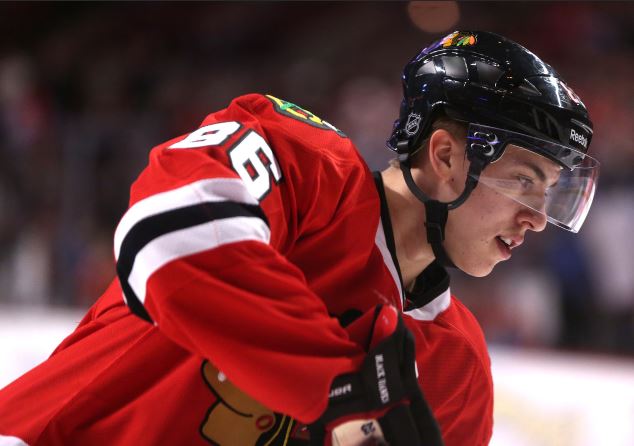 In the wake of the blockbuster deals for Jonathan Toews and Patrick Kane, the organization will have most of their top prospects in town to compete for roster spots in Rockford and, perhaps, Chicago.

Earlier, we discussed the defensemen attending this year’s Blackhawks prospect camp. Now, let’s look at the forwards on the roster.

But a couple of the shorter players – Louis and Vince Hinostroza (5-9, 165) – aren’t likely to be intimidated. Louis registered 25 points (12 goals, 13 assists) in 36 games with Miami (Ohio) last season while Hinostroza posted 32 points (eight goals, 24 assists) in 24 games at Notre Dame.

At 24, Rasmussen will be the oldest signed player at the camp, and he’ll certainly be one of the guys looking to make an impression.

Later this summer, three of the forwards in attendance at the Hawks’ camp will be at USA Hockey’s evaluation camp for the 2014 World Junior Championships: Hayden, Louis and 2014 first round pick Nick Schmaltz. Tyler Motte, who is not on the Hawks’ camp roster after a good first season at the University of Michigan, is also expected to attend the USA Hockey camp.

Schmaltz, Luke Johnson (the Hawks’ fifth round pick in 2013), and defenseman Nick Mattson will be teammates at North Dakota this winter. There will be four Ohio State Buckeyes in attendance next week as well.

Among the free agent forwards, there’s one Big Ten player to keep an eye on next week. Tanner Fritz just finished his third season at Ohio State and tied for the team lead with 24 assists in 32 games.