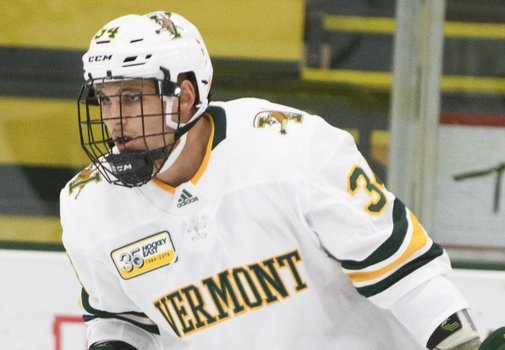 According to a University of Vermont release, defenseman Jake Massie has notified the coaching staff that he will pursue opportunities in professional hockey.

The Saint-Lazare, Quebec native saw action in 30 games during the 2018-19 campaign, his junior season. He registered nine points and blocked a team-high 41 shots. He was a 2015 sixth round draft pick of the Carolina Hurricanes but the Chicago Blackhawks currently own his rights.

The Blackhawks acquired his rights in a trade on Sept. 11, 2015 in a deal that sent Kris Versteeg, Joakim Nordstrom and 3rd round pick in the 2017 NHL Draft (Keith Petruzzelli) to Carolina for Dennis Robertson, Massie and a 5th round pick in the 2017 NHL Draft (Kristoffer Gunnarsson). Chicago later traded the draft rights to Gunnarsson, the 135th overall pick in 2017, to Vancouver with a 6th round pick for the rights to forward Tim Soderlund.