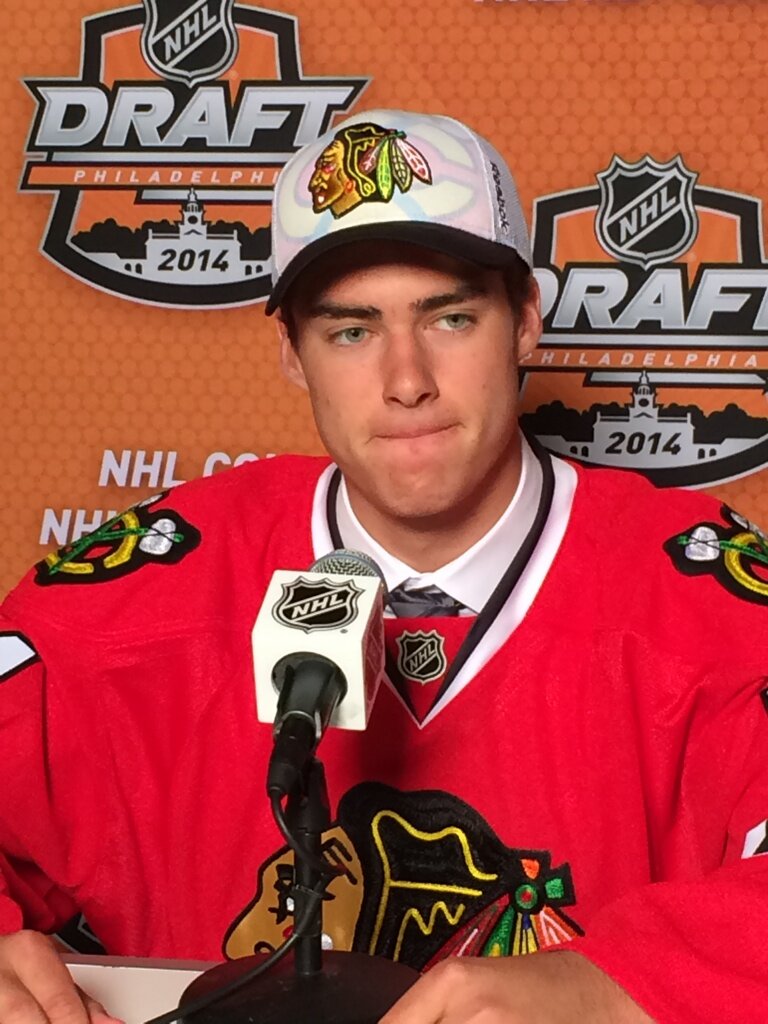 The Chicago Blackhawks will have 13 drafted players competing in the NCAA in the coming season.

A few of the names that highlighted this list last year – Stephen Johns, Kevin Hayes and Justin Holl – have graduated. But the addition of an NHL-leading seven college-bound players in the 2014 NHL Draft make the list more robust for the 2014-15 campaign.

Let’s take a look at which college programs will be impacted by Chicago Blackhawks prospects this season. University of Vermont
Michael Paliotta, D – Draft Year: 2011
A third round pick in 2011, Paliotta had a strong third season for Vermont. Listed at 6-4 and 205 pounds, Paliotta finished third on Vermont with 27 points (five goals, 22 assists). He scored three power play goals and a team-high 51 penalty minutes. Boston College
Chris Calnan, F – Draft Year: 2012
Calnan, Jeremy Roenick’s nephew, is headed back to Boston College for a second season. A third round pick in 2012, Calnan posted four goals and nine assists in 37 games for one of the top programs in the country last season. He added one short-handed goal, six blocked shots and a plus-12 rating to his freshman resume.

Yale University
John Hayden, F – Draft Year: 2013
Hayden stole the show at past summer’s prospect camp, but got off to a slow start in his first season at Yale. He finished strong, however, posting six goals and 10 assists in 33 games. Hayden had two power play goals and one game-winner as a freshman. A third round pick last summer, Hayden will turn 20 in February.

Ohio State University
Sam Jardine, D – Draft Year: 2011
A sixth round pick in 2011, Jardine scored one goal and added 12 assists in 36 games for the Buckeyes last season. He is entering his third season at OSU, and finished second among Buckeye defensemen in points last season. He’ll turn 21 in August, and hopes to help the Buckeyes improve on last season’s fourth place finish in the Big Ten.

Miami University
Anthony Louis, F – Draft Year: 2013
A sixth round pick last summer, Louis impressed at prospect camp. In spite of his size (listed at 5-7, 145), he had a nice freshman year at Miami with 12 goals and 13 assists in 25 games. He was the youngest player at Miami to reach 10 goals and 20 points last season. He’ll turn 20 in February.

Six more picks from the 2014 Draft class will join Schmaltz in the NCAA this coming season. The Blackhawks led the NHL with seven college-bound players drafted this summer. Here is where the rest of this year’s draft class will play their college hockey this season: