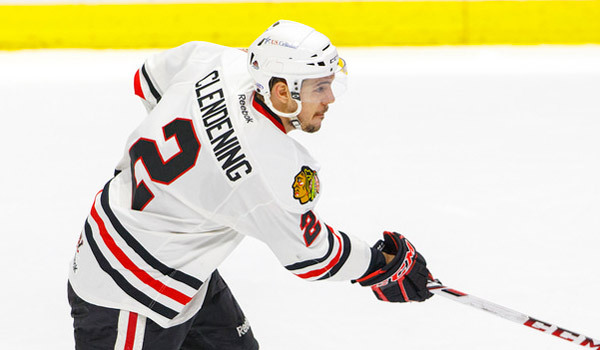 On Tuesday, ESPN released Corey Pronman’s top 100 NHL prospects heading into the 2014-15 season. Three Hawks made the list, with a fourth coming up just short. Forward Nick Schmaltz, the Hawks’ first round pick this summer, made the “honorable mention” list. Here’s what Pronman had to say about the three prospects who made his list.

“Teräväinen had a very impressive 19-year-old season, with a dominant performance in the under-20 camp in August 2013, a strong January, when he led the WJC in scoring, and an impressive spring, when he went on a lengthy run of accumulating points. His vision is off the charts, and when he gets the puck on the power play, it’s just a matter of time before a scoring chance is created.” “Hartman’s statistical production hasn’t been too impressive, but he impresses regularly on a scouting level. He’s small, but a high-energy and hard-nosed type of forward who can check good players. Hartman has a pretty good skill level as well, and showed the ability at the WJC to be a dangerous scoring forward.”

“Clendening has earned many accolades, and put up a ton of points at every level, but he’s yet to do the most important thing: Play an NHL game. That’s partially due to the Blackhawks’ organizational depth on the blue line, though this is a key campaign for him. In terms of puck skills, vision and overall offensive IQ, Clendening is among the top in the AHL, and projects as a potential top power-play quarterback.”