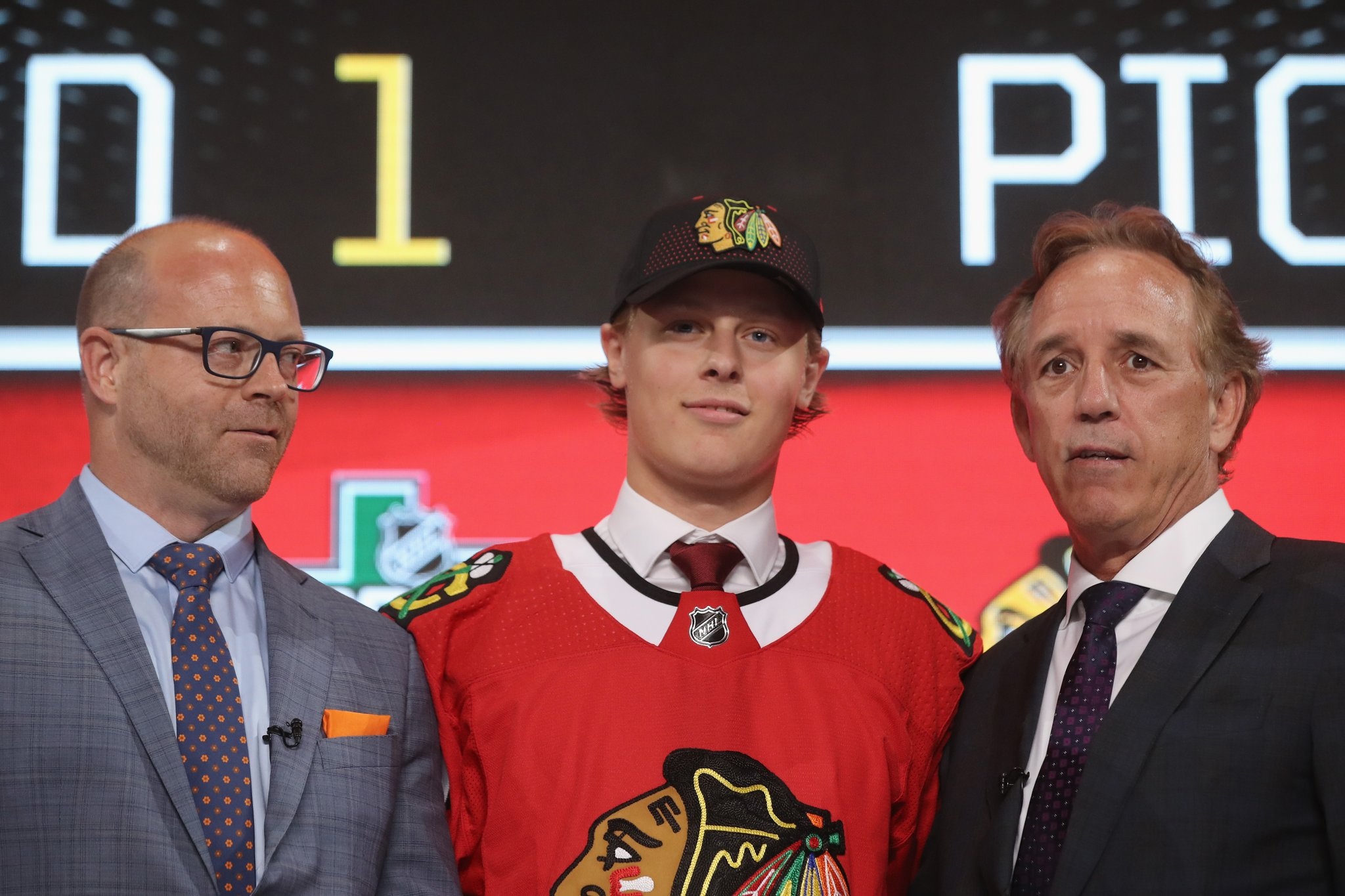 On Wednesday, Corey Pronman of The Athletic released his Top 100 prospects list in advance of training camps opening around the NHL. Three Chicago Blackhawks prospects made his list with a fourth receiving honorable mention consideration.

Pronman defined “High-End NHL Prospect” as “projects as a legit top-line forward who can play on your PP1/top pairing defenseman.” One Hawks pick was ranked in that category.

Boqvist’s hands and IQ all get very high grades. He’s very skilled and creative with the puck, on top of displaying top level, if not elite, vision. What I love about him is his attacking mindset. He’s always looking to jump up and make a play, looking for opportunities and wants to make a difference in the game. Boqvist skates fine with the ability to lead a rush and he closes his gaps well defensively. But his skating isn’t as much of a standout trait as his brain. His shot from the point is quite good as well and he’s very skilled at getting it through traffic, showing high shot generation numbers everywhere he goes. On defense, he’s small and not that physical. I’ve seen him make stops effectively versus players his age — not at an elite level, but more than passable.

Pronman defined “Legit NHL Prospect” as “projects to play, probably not in a top role, but is close enough that he could realistically get there.” Two Hawks prospects fell into this category.

Sikura was one of the best players in college hockey and is a dynamic offensive threat. He is a great skater with high-end puck skills and good offensive instincts. He’s a play-driver who generated a ridiculous amount of chances and shots for Northeastern albeit as a 23-year-old in college. My concerns with Sikura are more off the puck, as he’s not the biggest guy or known for being the most engaged physically or defensively. He’s ready to play real NHL minutes though due to his skill set and experience.

Pronman added the following comments about Sikura’s game in his recap of the Traverse City Rookie Tournament:

“Entering the tournament as one of the older players with a high talent level, it’s expected Sikura should make an impact, and he did. His speed and skill level are high-end, and with the puck on his stick he stood out amongst this group of players. He’ll need to show he can win battles versus men to get his game to the next level, but talent-wise he’s an NHL player right now without question.”

Jokiharju was one of the top defensemen in the WHL last season. He won’t stand out with a flashy rush, but he makes a lot of quality plays all over the ice and can QB a power play. Jokiharju’s skating stands out when you watch him due to how fluid a skater he is and how he can transition the play with his feet. He has excellent vision and makes a lot of high-level passes. He has some skill but I don’t see him as a player who relies on his hands. Defensively he’s solid for his age, but he needs to get stronger and more confident checking good players before he reaches the NHL.

Center Jake Wise was one of Pronman’s honorable mentions as well.