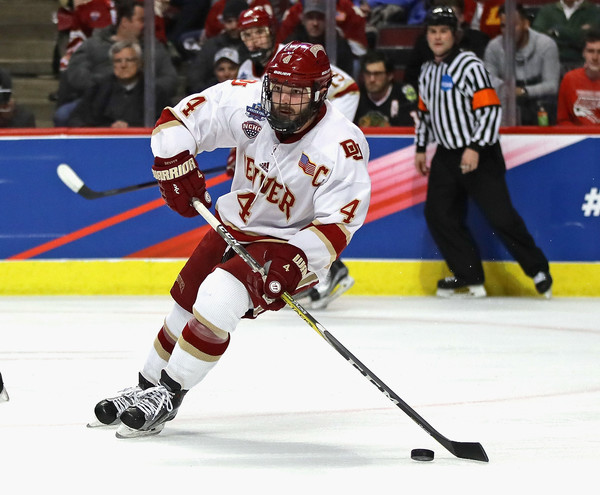 Stan Bowman has had his eyes on college players since he took over as the Blackhawks’ general manager. Every draft has included college-bound prospects, and he has been in the bidding on many top college players over the years. Indeed, Chicago has added college players via free agency frequently to varying success.

The latest name to appear on the Blackhawks’ radar is former University of Denver defenseman and 2017 Hobey Baker Award winner Will Butcher.

Butcher, 22, was a fifth round pick (#123) of the Colorado Avalanche in 2013 and just completed an incredibly successful senior season. He served as the captain of the eventual National Champions at DU and produced seven goals and 30 assists in 43 games on his way to personally being names the top player in the NCAA ranks.

Butcher is a left-handed shot listed at 5-10 and 190 pounds and he was impressive to watch in person for those Hawks fans who attended the Frozen Four at the United Center. The Blackhawks had eyes on the blue line at DU this season beyond Butcher’s potential free agency; Blake Hillman was a sixth round pick of the Hawks in 2016 and had a very nice 2016-17 campaign as well.

One hallmark of players the Blackhawks have liked historically is winners, and Butcher certainly qualifies. He’s been a member of championship teams in the USHL, NCAA and won gold with the US in the World U18 Championships as well. Leadership also matters; Butcher has worn an “A” for USA Hockey at two World Junior Championships in addition to being the captain at Denver last season.

Chicago has a lot of defensemen under contract already, however.

Darren Raddysh and Robin Press have AHL contracts with the IceHogs, but they’ll have competition to stay in Rockford. The Blackhawks also have newcomer Jan Rutta on an NHL contract and already have the following defensemen who might be in Rockford under contract for the 2016-17 season: Gustav Forsling (l), Ville Pokka (r), Erik Gustafsson (l), Luc Snuggerud (l), Carl Dahlstrom (l), Robin Norell (l), Viktor Svedberg (l) and Jordan Oesterle (l). As you can see, Chicago isn’t lacking for left-handed shots on the blue line in the system; Rutta and Pokka are the only two NHL-contract players who are right-handed shots on this list; Raddysh and Press are also right-handed.

57 thoughts on “Blackhawks To Pursue Will Butcher”