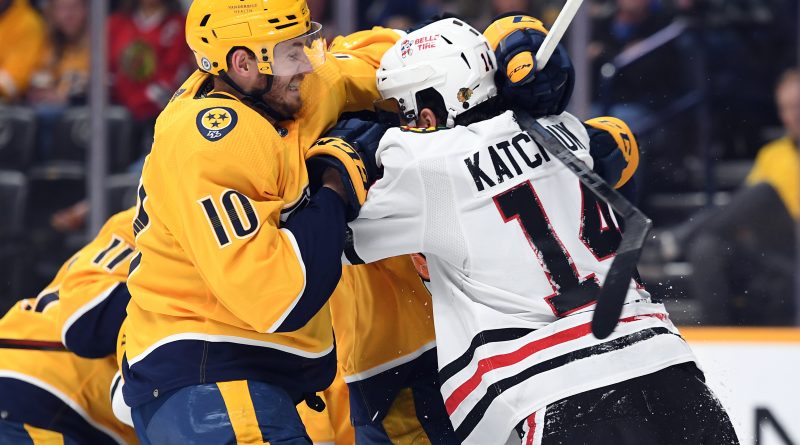 I mean, they tried.

The first period was a battle but the Blackhawks hung around. They were chasing one when Patrick Kane tied the game a little over seven minutes into the game.

A fan in the front row apparently said something to Kane because he immediately skated over and said something after scoring the goal. Kane was fired up and physical the entire game.

The Preds out-shot the Hawks 7-6 in the first period. Kevin Lankinen made a few big saves in the first and Chicago’s young defensemen were looking increasingly comfortable in NHL action. Alec Regula and Alex Vlasic each showed good, physical play and Regula showed off some offense as well. It’s almost like the Blackhawks have good defensemen in the system that should have been in the NHL for a while…

Things got chippy early in the second and continued to get more physical as the period progressed. Dominik Kubalik scored at 5:15 into the second period to give Chicago a 2-1 lead. More importantly, Lukas Reichel — who burned the first year of his contract by playing in this one — was credited with an assist for his first career NHL point.

A pile of bodies in front of the net resulted in a 4-on-4 with Mattias Ekholm and Mackenzie Entwistle in their boxes less than 20 seconds after the Kubalik goal. Apparently Boris Katchouk said the magic word(s) because he got a 10-minute penalty for something we couldn’t see through the broadcast at the same time.

Roman Josi scores his 20th of the season early in the 4-on-4 to tie the game. It appeared he scored again moments later, but the Blackhawks rightfully challenged that the play was offsides and the go-ahead goal was taken off the board… until Matt Duchene scored a power play goal with 22 seconds left in the period to give Nashville a 3-2 lead.

Nashville out-shot the Blackhawks 19-11 in the second period. Lankinen was doing everything he could to keep the game close but he was under fire way too often in the second.

When Mikael Granlund scored 3:14 into the third period it felt like the game was slipping away from the Hawks. It seemed like there were a couple slashes and crosschecks every time someone left the ice for either team; hacks and whacks were happening all over the ice without a whistle but Nashville was the more aggressive team with both the hitting and the puck.

Riley Stillman got the Blackhawks back within one with 5:29 left in regulation off a pretty play from Kane (again).

Alex DeBrincat is in the midst of his longest goal drought of the season, but he picked up his second assist of the afternoon on Stillman’s goal.

The Hawks pulled Lankinen with more than two minutes left but the Preds actually had a few better chances than the Hawks did in the first minute with the cage empty. Chicago’s best shot came with four seconds left in regulation but it was denied and the game ended with the Blackhawks on the losing end of another contest.