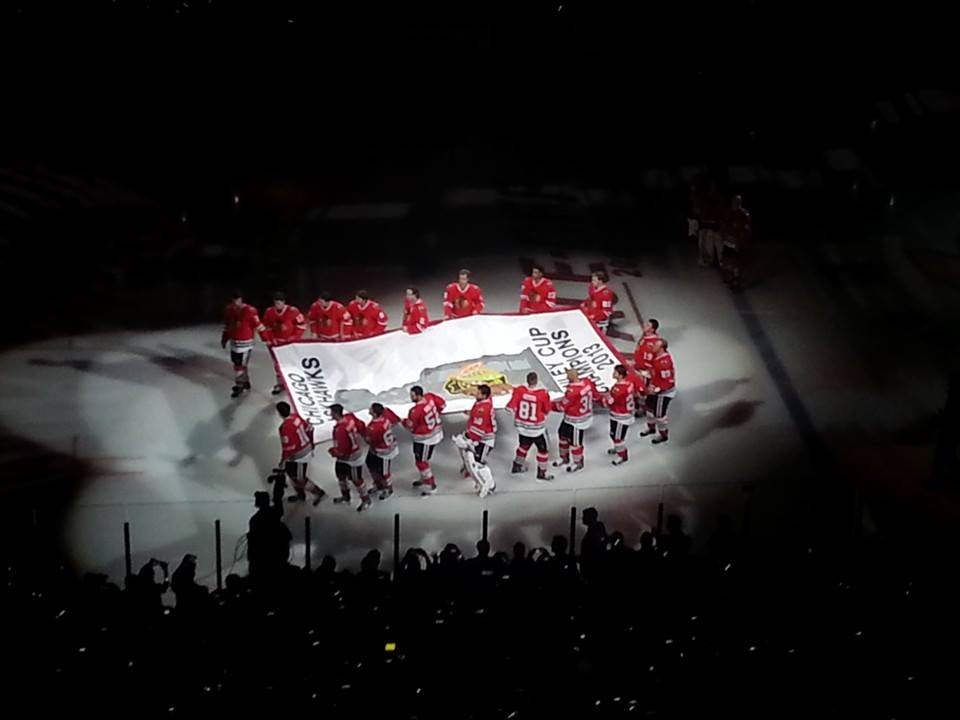 On Tuesday night, the Blackhawks raised their fifth championship banner into the United Center rafters.

After a stunning pregame ceremony, the 2013-14 team hit the ice against a very good Washington Capitals team. As they last season, the new edition of the Blackhawks started the new year with a win.

The pregame ceremony produced by the Blackhawks was spectacular, including wristbands on every seat that lit up either red or white, choreographed with the ceremony production. From Eddie Olczyk to Rocky Wirtz, the speeches were brief and well received.

Duncan Keith brought the Cup out to center ice this time, and placed it on a table at the heart of the arena. The final name on the new roster that was called, Chicago’s captain Jonathan Toews, raised the Cup one last time as a champion, kissed it, and put it on the table.

The Stanley Cup is no longer in possession of the Hawks. Now, like 29 other teams, they are chasing it.

Once the puck dropped on the 2013-14 season, the Hawks went to work defending their title.

The first goal of the game and the 2013-14 Blackhawks season was scored by… Brandon Bollig. Of course it was. His name is engraved on the Stanley Cup, he owns a championship ring, and earlier Tuesday night he helped skate a banner created by 1 Day Banner across the ice and raise it into the rafters. The only thing missing on his resume was scoring a goal in the NHL. Mission accomplished. Washington answered with a missile from Alexander Ovechkin on a Caps power play six minutes later. However, 24 seconds later Patrick Kane regained the lead for the Blackhawks.

Ovechkin’s goal was one of three power play tallies in six opportunities for the Caps on the night. While the Blackhawks countered with one power play goal in four advantages of their own, and with the understanding that the Caps have one of the more lethal power plays in the league, the penalty kill left a lot to be desired in the first 50 minutes.

Mikhail Grabovski, who the Caps hope can replace Mike Ribeiro this year, scored two of the Caps’ three power play goals and had a hat trick in his first game with Washington. He was also credited with an assist on Ovechkin’s goal, giving him a four-point season opener. Grabovski also won seven of 15 faceoffs in the game.

After Grabovski had scored two power play goals in the first six minutes of the third period. the Hawks battled back to take a 5-4 lead with goals from Brandon Saad and Johnny Oduya. The goal from Saad came off a ridiculous feed from Michal Handzus, and Oduya’s knuckled through the glove of Caps netminder Braden Holtby.

With a one-goal lead, something neither team was able to hold the entire night, the Hawks found themselves short-handed once again when Patrick Sharp was called for goaltender interference at 15:53. Only 34 seconds into the penalty kill, rookie Joakim Nordstrom was sent to join him in the box after a clearing attempt sailed over the far end glass and out of play for a delay of game penalty.

In the nearly 90 seconds of 5-on-3 that followed, Niklas Hjalmarsson did a magnificent job of blocking shots and taking away space. Hjalmarsson was credited with three blocked shots and two assists in the game, but his work on the penalty kill late in the third period was a reminder of how valuable he has become to the Hawks.

Saad added two assists to his one goal to lead the Blackhawks with three points in the opener, and he was rewarded with the game’s number one star. Marian Hossa was awarded an empty net goal on a penalty late in the game to give him two points in the game (one goal, one assist).

The six Blackhawks goals were scored by Bollig, Kane, Brent Seabrook, Saad, Oduya and Hossa. As they did so many times last year, the Blackhawks finished with a flurry, scoring three unanswered goals int he third to put the game away.

In net, Corey Crawford was having a decent – not great – night through the first two periods, allowing two goals against 19 Washington shots. However, it appeared a high shot stung him during a Caps power play early in the third before he allowed Grabovski’s second and third goals.

Jonathan Toews talked to Crawford, who appeared to be laboring, after he deflected a shot out of play. He bobbled a couple other shots that he had easily handled earlier in the game during the sequence as well. After the first power play goal, he skated to the ice to get a fresh bottle of water from the bench, and his teammates stalled to try to buy him some time on a couple occasions.

After a few shaky moments, and two power play goals allowed, Crawford settled down and finished the game strong. In total, he allowed four goals – three of which were on the power play – against 32 shots. He did earn a victory in the game.

Toews had one assist and won 11 of 21 faceoffs. Marcus Kruger won 10 of 17 faceoffs with two blocked shots and three hits in the game. Andrew Shaw and Bollig led the Hawks with five hits each, and Shaw took a series of shifts between Sharp and Hossa. Handuz had the assist on Saad’s goal and won six of nine faceoffs.

Overall, in spite of the four goals against, the Blackhawks appeared to be in much better shape than they were to start the lockout-shortened 2013 season. Duncan Keith played a great game, skating 24:51 with two blocked shots, two takeaways and one hit. He was probably the fastest skater in the rink not-named-Nick Leddy, and had a really good, active stick the entire night.

Leddy skated 17:28 in the game and was credited with three hits as Quenneville tried to spread out ice time through his top five defensemen. Seabrook and Hjalmarsson were just over 20 minutes on the ice, while Oduya was just under 19 minutes in the game. Michal Rozsival was limited to 14:42 in the game, but was still credited with two hits and an assist.

The celebrations are over, the jewelry has been distributed and the banner is in the rafters. The reality now is simple: the Blackhawks are 1-0-0 in the 2013-14 season.