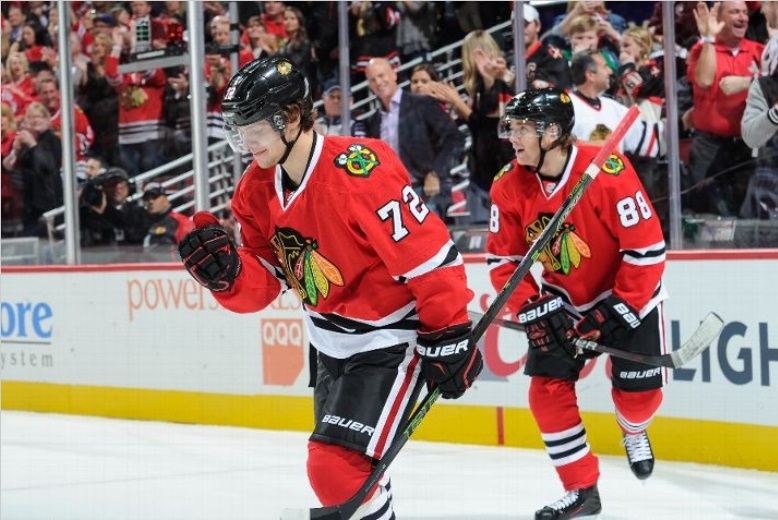 Chicago knows how to put on a show, and once again the Blackhawks organization reminded the rest of the NHL that this team does two things exceptionally well: win, and throw one helluva party. Unfortunately, once the sixth banner was in the rafters, a game had to be played. And one of the better teams in the Eastern Conference was waiting on the other end of the ice.

The New York Rangers were ready to go from the drop of the puck, and it took them only 1:43 to get on the board. Oscar Lindberg opened the 2015-16 season with his first of the season for the blue shirts, giving the visitors an early lead. New York was able to bring a 3-on-2 rush up against Trevor Daley and Trevor vanRiemsdyk and were able to capitalize.

Almost 13 minutes later, one of the new faces made an impact.

Artemi Panarin looked good all night, skating on the second line with Patrick Kane and Artem Anisimov. Despite only playing in the final preseason game, he looked comfortable and confident the entire night. He skated 16:50 and was credited with two hits and his first career goal in his NHL debut, a performance that should excite fans about things to come.

But, again, unfortunately the Rangers didn’t care about the Blackhawks’ storylines.

The Rangers quickly added two more goals in the final four minutes of the opening period to extend their lead to 3-1 through 20 minutes. Kevin Klein and Derek Stepan took care of business for the Rangers, and Stepan’s goal would hold up as the game-winner.

In the second period, Teuvo Teravainen added his first goal of the new season.

Teravainen’s goal was the final score of the contest, a clean game that only saw one power play; the Blackhawks had an advantage late in the first period. Andrew Shaw and Keith Yandle received off-setting minor penalties late in the game as well, but the Blackhawks weren’t able to take advantage of the 5-on-4 with Corey Crawford on the bench for the final 79 seconds.

Crawford made 24 stops in the loss, while Henrik Lundqvist stopped 32 in the victory.

Shaw and Ryan Garbutt led the Hawks with five hits each, and Shaw also won four of seven faceoffs. Unfortunately for Shaw, he was saddled with Bryan Bickell and rookie Kyle Baun on the night, and had to create offense for himself.

Bickell looked lost and made absolutely no impact on the game; the four million dollar man was credited with three hits and zero shots on goal in 11:54 after receiving the “wake-up call” of being placed on waivers. Baun, meanwhile, skated only 9:23 and was credited with one hit and one shot on net for the night.

Anisimov won 10 of his 16 faceoffs in the game and also picked up three hits, but finished the night minus-two. Jonathan Toews won 10 of 18 at the dot and was credited with one hit, one takeaway and an assist on Teravainen’s goal.

Chicago only blocked three shots in the game, two from Duncan Keith and one from Daley. Kane led the team with five shots on net, and outpaced the rest of the forwards in ice time at 22:22. No other Hawks forward had more than Toews’ 19:04 in the loss.