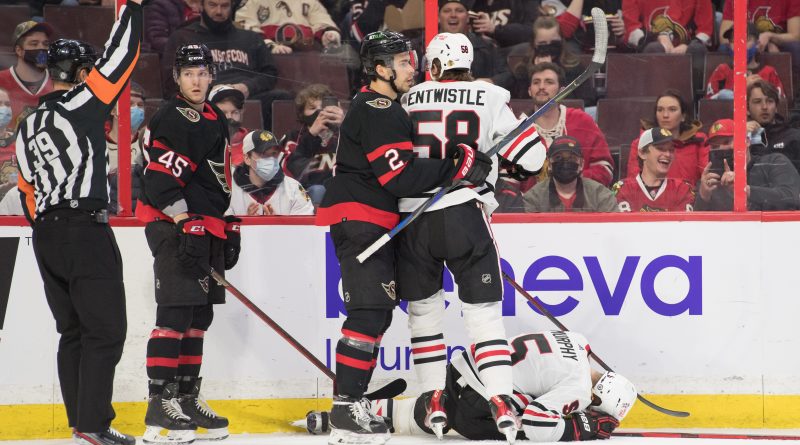 The Blackhawks were in Ottawa on Saturday night to face one of the few teams that’s been worse than them the entire season. The Senators have a few nice pieces and they were supposed to take a step forward this season… but leaving the top of the lottery for the middle isn’t quite what Ottawa fans were expecting.

Chicago opted to roll with 11 forwards and 7 defensemen in the game, with Erik Gustafsson getting the nod as the extra body on the back end. That approach would be tested early.

It took less than three minutes for a huge blow to the Blackhawks’ lineup. Parker Kelly got a good, long run into boarding Connor Murphy, whose head went into the boards. He collapsed to the ice and did not move; it appeared he was out when he landed. Mackenzie Entwistle came over and immediately motioned to the bench for help.

Murphy was taken off the ice after a few scary moments on a stretcher in a neck brace. He gave a thumbs up, which is good. But that was a scary moment for the Blackhawks, who reported later in the game that he was staying at the arena under the supervision of the team’s medical group but was done for the night. Kelly got a five-minute major and a game for the hit.

The Hawks were clearly shaken. Head coach Derek King called everyone over after Murphy exited and tried to calm them down. But you could tell they weren’t ready for the advantage. And Connor Brown took advantage, scoring a short-handed goal to give the Sens a 1-0 lead.

Even after the scary scene with Murphy taken off, Ottawa kept bringing the physical play. Zach Sanford hammered Kirby Dach almost nine minutes into the game; Dach’s head was down and it was a clean — but big — hit. Big enough in the wake of the Murphy hit that Jonathan Toews dropped the gloves with Sanford. While admirable that the captain would step up for the big kid who just got trucked, Toews took a couple hard rights from Sanford before they both went to the boxes. Toews got the extra two minutes for starting it, and didn’t take a shift the rest of the first period after leaving the box.

Almost 11 minutes after the Brown goal, Thomas Chabot scored to give the Sens a 2-0 lead.

So the Hawks were down a key defenseman, their captain fought and they were down two to a bad team. What else could go wrong?

Well, in the closing seconds of the period, Tyler Johnson took a puck to the side of the head. He was clearly in pain on the bench and, as the second period was starting, the Hawks announced he was also done for the night because he was in concussion protocol.

Ottawa out-shot the Blackhawks 10-6 in the first — even with Chicago having a full five-minute power play after the Murphy hit. The Blackhawks were down to 10 forwards, six defensemen and had no energy whatsoever.

The good news to start the second period was that Toews was back on the ice.

And he had energy.

Toews showed up on a line with Kane and the two connected on a goal 58 seconds into the second period to get Chicago on the board.

It looked good. And, frankly, Kane moving into second all-time on an assist to Toews just felt right after all these years.

But why would those two be done? We were feeling the throwback vibes so they got another shift together less than two minutes later on the power play and 88 found 19 again for another goal.

Toews came into the game with five goals on the season but he showed off the snipe on both shots.

Nine minutes into the second period, Caleb Jones ripped home his third of the year and the Hawks’ third of the night (and period) to give the Blackhawks a 3-2 lead.

Seth Jones picked up an assist on Caleb’s goal; the Jones brothers became the first siblings to factor in the same goal since Rich and Brent Sutter did it on Valentine’s Day in 1994.

Unfortunately, the Blackhawks’ roll didn’t get them the next goal. Nick Paul made a nice move and ripped home a goal at 15:41 to tie the game.

At 15:49 the Blackhawks got the lead back, however. Sam Lafferty was on the scoring end of the Hawks’ fourth of the night.

When the dust settled from the middle 20 minutes of action, the Blackhawks had out-shot the Senators 15-10 in the period. Chicago scored four times and took a two-goal lead to the room.

Two-goal leads have been scary at times for the Blackhawks this season, so we hoped to see the Hawks get the next one. It took almost nine minutes into the third period for that next goal to be scored, and it came off the stick of Caleb Jones again.

Dylan Strome was credited with a redirection on a Seth Jones shot 69 seconds later to give the Blackhawks a four-goal lead.

And from there the Hawks took control of the puck and limited the Senators’ chances. Even down two skaters, the Blackhawks were able to control a tremendously mediocre Ottawa team. Chicago out-shot the Sens 7-3 in the third period and easily skated away with the win after scoring their sixth goal of the night.

Kane picked up three assists in the game, one on each of Toews’ goals. Kane, Strome and Alex DeBrincat were relied on heavily with the Hawks down to 10 forwards for the final 40 minutes. All three were over 24 minutes on the ice and Strome won eight of a team-high 19 faceoffs.

Toews scored twice and was dominant at the dot; he just need an assist to get the Gordie Howe hat trick. Toews won nine of 11 faceoffs in the game.

Ryan Carpenter also won eight of 13 faceoffs and picked up an assist.

32 thoughts on “Blackhawks Rally After Connor Murphy Injury, Blow Out Sens in Ottawa”