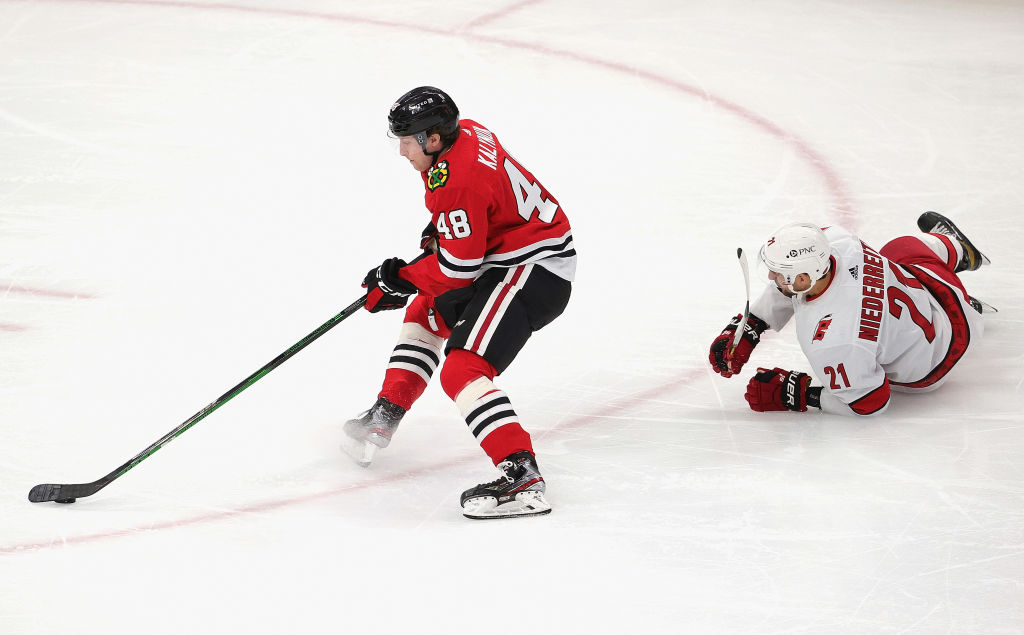 If you like faceoffs, Thursday night at the United Center was your kind of hockey game!

The Blackhawks got a desperately needed win against the Canes on Tuesday night despite getting half as many shots on goal as Carolina had in the game. Kevin Lankinen kept them in the game long enough to win it, but the Hawks were certainly looking for an improved effort on Thursday.

Unfortunately, the first period on Thursday was more of the same. Chicago was only short-handed for 71 seconds in the first but were out-shot 13-3. Vincent Trocheck scored at 9:48 into the first to give Carolina a 1-0 lead, but from there Lankinen again kept his team competitive.

When Warren Foegele scored 2:22 into the second period the Hawks were chasing. They needed to change the momentum and start generating consistent offense for the first time in four periods. Lankinen was doing what he could, but the skaters needed to spend more time on the other end of the rink.

Carolina did the Hawks a favor taking a couple penalties in the first half of period two. Jordan Martinook and Dougie Hamilton served their two minutes without Chicago taking advantage, but the Blackhawks were starting to spend more time offensively.

At 15:21 the Hawks finally got one past James Reimer. Wyatt Kalynuk made a terrific pass to Dominik Kubalik and he put home his 12th of the season.

The assist was the first NHL point for Kalynuk.

Chicago out-shot Carolina 11-8 in the second period and took a one-goal deficit to the room for discussion before the third period.

At 5:46 into the third period, the Blackhawks tied the game. Kirby Dach set up Brandon Hagel for the game-tying goal. The play was close to being offsides but Carolina didn’t challenge. The game was tied.

The game remained tied for… less than two minutes. Foegele scored his second of the night and eighth of the season to grab the lead back for the visitors. At the time of the goal, Carolina had a 25-15 shot advantage in the game; Chicago’s only shot of the period went it in the opening six minutes of the third.

To their credit, the Blackhawks didn’t back down. They got back into the pressure game and were able to get back on the offense. Dylan Strome scored for the second time in as many games since becoming a father earlier this week, redirecting a shot into the net to tie the game at three.

Connor Murphy and Mattias Janmark were credited with the helpers on Strome’s seventh of the season. The goal is Strome’s 100th point with the Blackhawks.

Less than 90 seconds after the Strome goal, Hamilton ran over Ryan Carpenter nowhere near the puck and the Blackhawks got a power play. When the Hawks went on the advantage, two of their three shots in the first 12 minutes of the period had gone in.

The Blackhawks put great pressure on the Canes during the power play but weren’t able to beat Reimer, who lost his stick for the final 20 or 30 seconds of the advantage. Strome almost redirected another shot into the net; he was having a strong third period and overall solid night.

With 40 seconds left in regulation Kubalik got a great scoring chance and almost beat Reimer, who wasn’t confident he had the puck underneath him. He did, unfortunately.

After the ensuing faceoff the Canes got the puck, sprinted the other direction. A bouncing puck wasn’t cleanly collected by Lankinen and a trailing Jesper Fast put the rebound into the net with 28.9 left in regulation.

Chicago wasn’t able to beat Reimer in the closing seconds and a decent effort came up short. After a rough first period the Blackhawks rebounded and played well for 39 of the final 40 minutes.

Why the comment about faceoffs in the open? Kubalik and Alex DeBrincat were the only Chicago forwards to not attempt a faceoff in regulation. The two teams went to the dot 62 times in the game.

Strome won 10 of 18 faceoffs in the game and was credited with two takeaways and two shots on net. He was good in the third period especially. Carpenter won all five of his faceoffs.

35 thoughts on “Blackhawks Rally Comes Up Short Against Carolina”