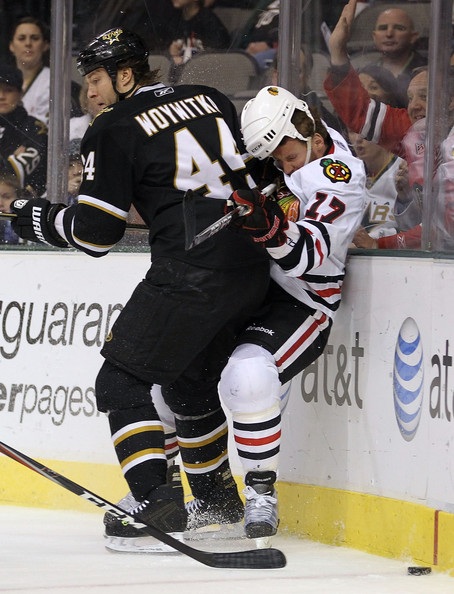 Yes, it’s only one loss.

Yes, they still have 27 games left and are within smelling distance of the eighth seed in the Western Conference.

But Friday night may have been enough that the Blackhawks cannot come back.

This is being written more than 10 hours after the Stars scored on all three shootout opportunities to ruin Marty Turco’s return to Dallas, so emotions have been sufficiently slept on. When the Blackhawks brought only nine forwards out of the dressing room to begin the third period, the going was officially getting tough.

The team has been subjected to a bag skate after an ugly effort a few nights before, were skating for their playoff lives, and were now down three forwards against a first place team. They tried as hard as they could to make a push, and the final eight minutes of regulation and overtime were some of the most dramatic, playoff-intense hockey we’ve seen all year. But the depleted Hawks just didn’t have it.

What becomes a bigger issue now is the status of Fernando Pisani, Ryan Johnson and Viktor Stalberg moving forward.

Pisani received a violent hit that, if it were into full boards, might not have been as bad. But because he was hit into the bench area, there was nothing to catch his torso. He might be listed as day-to-day, but a return from Pisani any time soon would be surprising.

Johnson and Stalberg simply disappeared. Stalberg left the bench after only one shift in the second period, and Johnson finished a double shift at the end of the second period after getting his lid knocked off.

Oh, and Marian Hossa’s got the flu. And John Scott’s been sick for a couple weeks, and could barely handle practice.

So the Blackhawks have a full NHL roster with 23 players, and could now have five missing forwards.

To make matters worse, they can’t afford to add much, either.

The Blackhawks made a bold statement when they added Michael Frolik, which improved the team’s talent up front but also sucked up some of the little remaining cap space GM Stan Bowman had to work with; now that he’s told the entire free world that he’s in the market for a defenseman, his options have become limited because of the minimal amount of salary he can afford to add.

While the Frolik trade wasn’t a panic move, anything done at this point is absolutely a result of the developing crisis that is the Chicago Blackhawks.

Reality now is that, even if the answer was in Rockford, the Blackhawks couldn’t bring that player up. They have no roster space. They have no cap space. Even if the Hawks placed someone on IR, they would be rolling the dice by sucking up more NHL salary by adding a player that might not impact the team enough to justify the financial implications.

The point is, last night left the Blackhawks badly hurting both physically and financially.