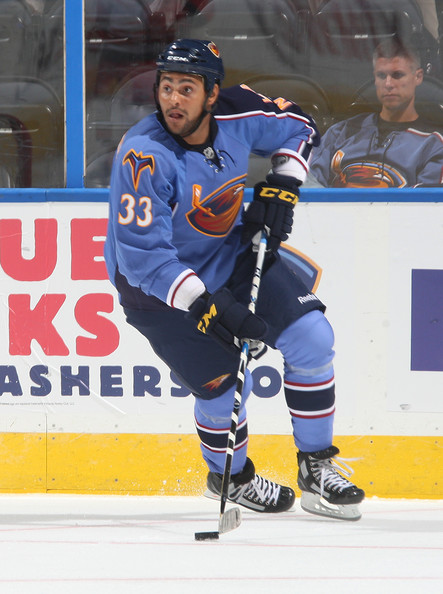 On Saturday night, the struggling Blackhawks get a chance to play against four former teammates in Atlanta.

Andrew Ladd’s sweater now bears an “A” for both Atlanta and his title of assistant captain, and Dustin Byfuglien is playing on the Thrashers top defensive pair. Those aren’t the only subtle changes the Hawks will experience when they get together with their former teammates. Look at the numbers these guys are producing so far for the Thrashers:

That’s pretty solid production from Ladd and Byfuglien, and pretty much what you would expect from Eager and Sopel. Add to these superficial numbers that Sopel has 29 blocked shots (12th in the NHL) and Byfuglien has three game-winning goals (tied with five others including Patrick Sharp for the NHL lead), and the Thrashers appear to have done pretty well by adding the four former Hawks to their roster.

But does that mean the Blackhawks did poorly by moving the four players?

Coming off a rough stretch including two straight losses to teams the Hawks should have defeated and four regulation losses in five games, lots of fans that had just been able to separate themselves from their affections for the departed Hawks now face the tough emotional task of watching what was play against what is for Chicago. There are a few things to consider before labelling the two trades that sent the four players from Chicago to Atlanta complete losses, though. First, the biggest thing to consider is money. Look at the current cap numbers for the four former Blackhawks in Atlanta:

Let’s put those numbers into context. In no way am I defending John Scott’s salary, but look at the following players on the Blackhawks roster and how much they cost the Blackhawks against the cap this year:

So for a little more than what it would have cost to keep Byfuglien in a Chicago sweater, the Hawks are skating six players. Of course we talked at length this summer about the importance of keeping Sharp in Chicago, and clearly his start to the new season has rewarded the confidence of the fans and faith of management by earning every penny of his salary. However, the reality of the salary cap was that Byfuglien and Sopel were making too much money, and both Ladd and Eager were restricted free agents that were due unknown raises.

Another reminder from the summer deals: Jeremy Morin is now among the top prospects in the Blackhawks organization because the Hawks made these deals with Atlanta. While Marty Reasoner never touched a Chicago sweater, both Morin and Ivan Vishnevskiy could play a big role in the future of the Blackhawks. By adding young talent to the organization, the Hawks helped build the foundation for sustained success with new faces ready to contribute in the future.

There is one final dose of reality that fans need to deal with when digesting the success of the former Blackhawks in Atlanta. It’s called ice time.

Look at the number being put up by the four former Hawks this year. Not only would Byfuglien likely be playing forward still in Chicago, but he and Ladd would have settled onto the Hawks third line where they were for most of last year. When you look at the minutes coach Joel Quenneville budgets for third line players like Stalberg (11:13), Skille (10:35) and Pisani (12:48), there is little room to believe that Ladd or Byfuglien would have been skating anywhere close to the amount of ice time they’re receiving for the Thrashers.

In fact, Eager’s 12:28 might be a few minutes per night more than he would be receiving in Chicago if he were still here. The only ice time minutes that are appropriate to the work load one of these guys would have received if he had stayed in Chicago is Sopel, who has been adequately replaced by Boynton (who ranks 2nd in the NHL with 41 blocked shots).

It is easy to cloud judgement of potential impact by looking simply at gross numbers. Anyone who watched these players perform last year knew that, given a reasonable opportunity, they would succeed. What these players, especially Ladd and Byfuglien, are achieving early in the new season should simply confirm in the minds of Hawks fans just how deep last year’s team was.

But placing their performances into the perspective of the opportunity they have received, and knowing that they likely would not have received that opportunity in Chicago, fans must temper their longing for the past.

Would it be nice if one of these guys was still in Chicago? Absolutely. Especially Ladd and Byfuglien. However, the four or five players that are on the Blackhawks injury-plagued roster making, combined, the salary of Ladd or Byfuglien is the harsh reality of the salary cap world we now live in.

So when you watch the game on Saturday night, be thankful for what these four guys brought to the rink every night last year, but look forward to what may come from the Hawks this year and down the road because of the moves that were made this summer.

2 thoughts on “Blackhawks Ready For Reunion In Atlanta”