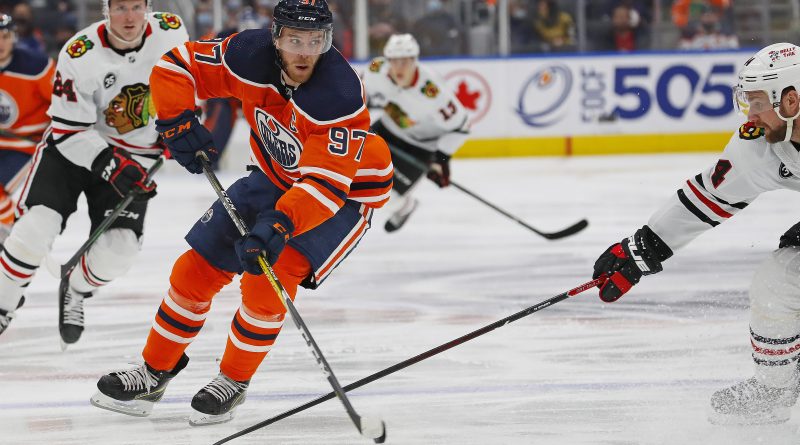 On Wednesday evening the Blackhawks got their first look at the Edmonton Oilers with Evander Kane in their lineup. After allowing four first-period goals in the previous meeting with the Oilers, Chicago looked to start their “second half” of the season with a much better effort.

The Hawks would go with a lineup including Jakub Galvas on the blue line in place of Erik Gustafsson and Josiah in for Brett Connolly; Jonathan Toews is still in concussion protocol and did not make the trip with the team.

Chicago wanted to get off to a faster start and they did precisely that. Ryan Nugent-Hopkins went to the box at 1:15 into the game and that opened the door. Patrick Kane made a beautiful pass to Alex DeBrincat who scored his 27th of the season just 104 seconds into the game.

DeBrincat was then playing the setup man barely a minute later. He found Brandon Hagel and Chicago had a two-goal lead less than three minutes into the game.

Late in the first period, Duncan Keith got tangled up on a would-be Blackhawks rush and crashed into the boards hard. It appeared he was out on the ice initially and needed to be helped off the ice by teammates.

Scary sight: Duncan Keith takes a hard fall along the boards and is helped off the ice. #Blackhawks pic.twitter.com/2RbGrrlgmZ

At the end of the first period, the Hawks took a 2-0 lead to the room. The Oilers out-shot the Hawks 13-12 but couldn’t beat Fleury.

Without Keith available to return, the Oilers decided it was time to play offense. And they dominated the puck for the first half of the second period. Connor Murphy went to the box at 4:15 into the period for apparently catching Evander Kane with a high stick and Edmonton was able to convert. Leon Draisaitl was credited with a power play goal to cut the lead in half.

The OIlers kept the pressure on. The first 12 shots of the period were all credited to the Oilers; Chicago could barely get the puck long enough to clear the defensive zone. Evander Kane did his best to try to kill the Oilers’ momentum with a bad, worthless boarding of Hagel but even a two-minute advantage didn’t help Chicago’s offense get going.

Fleury earned every penny of his salary in the second period. When the horn sounded, Edmonton had out-shot the Hawks 20-6 in the period and had a 33-18 advantage in the game. But the Blackhawks took a 2-1 lead to the third period.

Draisaitl went to the box 48 seconds into the third period for a questionable hit on DeBrincat (I would use the word dirty). Giving the Blackhawks a power play early in a period didn’t work out for Edmonton in the first period, and it failed them again in the third. DeBrincat found Dylan Strome and — after surviving a barrage for 20 minutes in the second period — the Blackhawks once again had a two-goal lead.

Nine minutes later, Kirby Dach — who appears to have lost a tooth in the second period — slammed in the Blackhawks’ fourth goal of the night.

And, somehow, the Hawks had a three-goal lead with 10 minutes to play in regulation. Hagel and Jake McCabe picked up assists on the Dach goal, giving the Blackhawks four players — DeBrincat (3), Hagel, Strome and Dach (2 each) — with a multi-point night.

With 17 seconds left in regulation, Evander Kane went to the box again — this time for slashing Caleb Jones. Because why not confirm all of the worst things people in Chicago think about you?

The game ended with the Blackhawks picking up a 4-1 win.

You know all of those things we’ve said in the past about “if you want to be a playoff team, you can’t lose to that bad team”? Yeah, this was one of those losses for the Oilers.

36 thoughts on “Blackhawks Roll Oilers To Start ‘Second Half’”