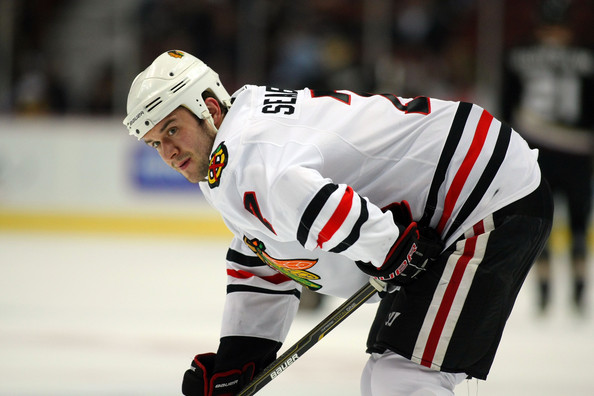 With news that Brent Seabrook’s deal is done, now is an appropriate time to look at the Blackhawks’ cap situation moving forward.

Back in mid-January, we looked at some potential numbers for the Hawks next year. However, now that we have a locked-in number for Seabrook, we can add him to the list of existing contracts.

Here are the contracts already written for next season:

As we discussed back in January,  Jeremy Morin and Marcus Krüger should both factor into the mix next year. Let’s now add their deals to the list above.

What do we have so far?

That isn’t a terrible group, with the top six intact from this year.  Morin has seen action in the NHL, and GM Stan Bowman has expressed strong hopes for Krüger.

This is something Hawks fans can be truly excited about. The Blackhawks have their top five defensemen locked up through next year, and with Nick Leddy maturing with each game the options for Bowman will be open.

What about the restricted free agents on the current roster? Here are a few players the Blackhawks will have to negotiate with:

What could these players cost the Blackhawks? Here are a few conservative estimates:

If we add these restricted free agent deals to the roster listed above, the Hawks would be tight against the cap again next year. Indeed, the money being wasted on John Scott may cost the Hawks the ability to keep seven defensemen on the roster next year.

However, if we add these five restricted free agents to the 14 extisting contracts the Blackhawks have for next year, there are 19 players that should be in the NHL next year totalling roughly $58.62M.

That leaves a little more than $3.3M to add another defenseman to the team.

Moral of the story: the Blackhawks have spent a lot of money on a very good, championship-caliber core group of players. Now they need to get creative and fill out a roster with quality depth.

2 thoughts on “Blackhawks Salary Cap in 2011-12: An Updated Perspective”