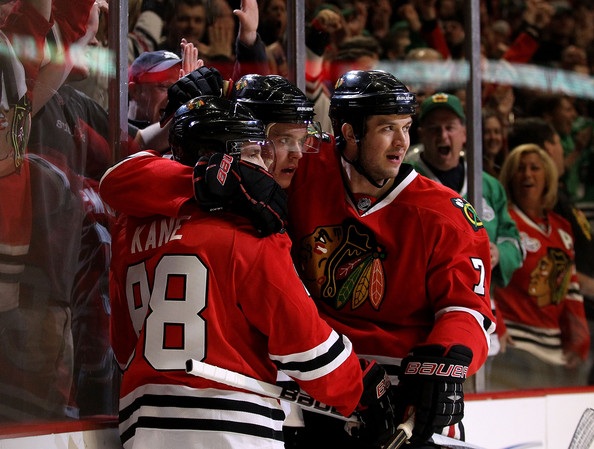 Now that Marcus Krüger has arrived in Chicago, it’s worth taking a look at the perceived “trainwreck” of a salary cap situation facing the Chicago Blackhawks next year.

Back in mid-January, we looked at some potential numbers for the Hawks next year. In late-February, we revisited the situation after Brent Seabrook got paid and updated future potential earnings for some of the restricted free agents.

Let’s take another look at the 2011-12 situation in Chicago.

As we’ve done in our first two excersizes, we need to lay a foundation that includes at least one assumption regarding the NHL’s salary cap.

Here are the salaries already in place for 2011-12, now including both Seabrook’s increased figure and, now, Krüger:

The total dollar amount guaranteed to these 13 players is over $50 million, which instantly creates a great deal of anxiety with some fans for no good reason at all. Consider the roster that’s in place with just these players under contract:

Those are two pretty good lines up front and three centers that play a good two-way game. Now consider the defensive pairings:

How many teams will have a top-five group this solid coming back next year? Not many.

Now let’s project some numbers. There are a handful of restricted free agents that need to be considered, including Chris Campoli (who was acquired after our breakdown in late-February). Here are some conservative estimates for the RFAs the Hawks will bring back next year:

That’s six more players, including two good goalies, that could/should be under contract with the organization next year for a total of $9.35M.

Not included in this group is Viktor Stalberg, who figures to be a potential cap casualty if his salary demands are too high. If he’s willing to return at a similar amount to where he’s at now ($850k), he could get a return invitation.

What would we have for a lineup if these players returned?

With the exception of Krüger, that group would have played at least a couple months together and that has played pretty well. Bickell and Brouwer could both be bringing 200+ hits and 20+ goals back while all three players on this top line could be 30-goal scorers.

What about the blue line and in net?

What would the total financial damage be?

The Blackhawks would be looking for two forwards and perhaps a defenseman to add depth to their roster beyond the players listed here. Here are a few internal options to consider looking forward, and their respective cap numbers in the NHL:

Note: AHL All-Star defenseman Brian Connelly is not considered in this list because he is a restricted free agent this summer.

As you can see from this breakdown, the Blackhawks have enough space to put a roster on the ice in 2011-12 that’s good enough to compete for another Stanley Cup, and they don’t have to go through another fire sale.

Will there be trades? Probably. And will some players not come back that could have? Perhaps. But the purpose of this is to bring comfort to Hawks fans that think the world will end when this season ends.