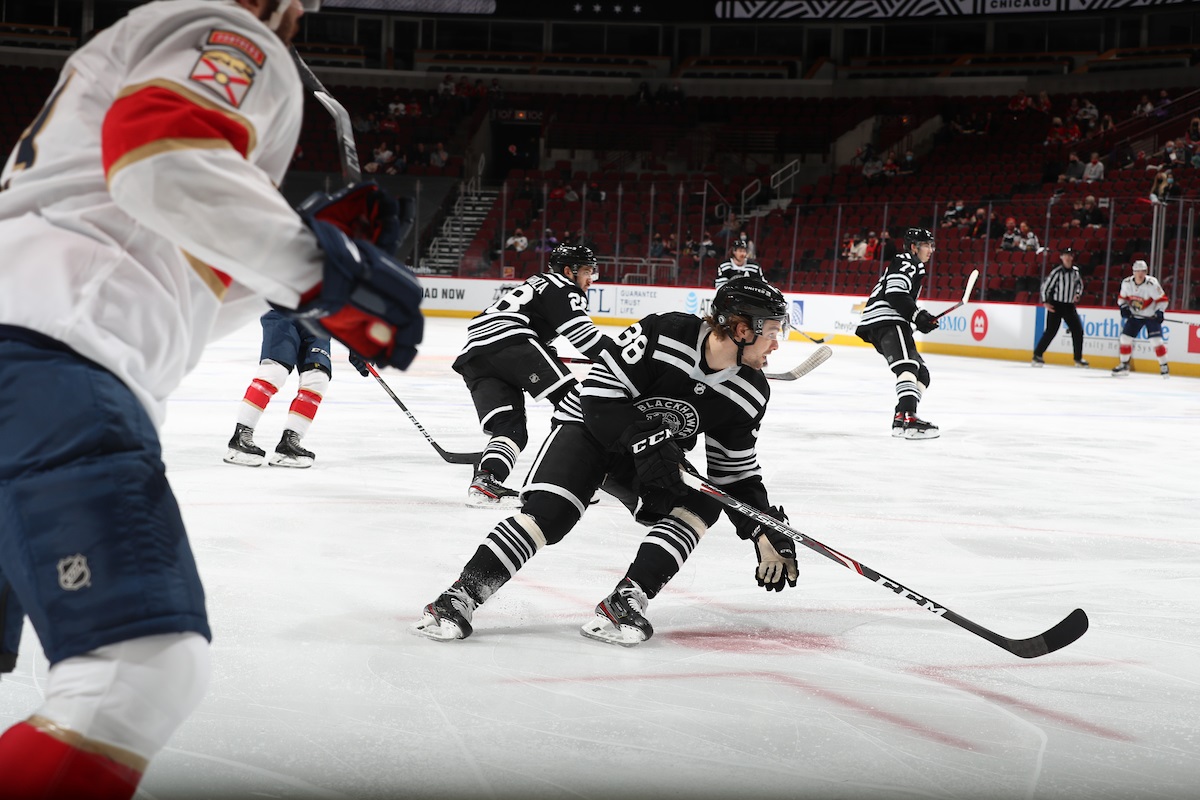 Let’s spend some time talking about how the 2021 Chicago Blackhawks had a unique brand of crapping the bed. And Saturday night was a prime example of what makes this team entertaining and the future exciting… and the present so frustrating.

The Hawks got out-skated in the opening 20 minutes, giving up 17 shots on net in the first period. Chicago was credited with 14, but it felt like Florida had the puck for the majority of the period. The only goal of the period came off the stick of former Hawks forward Anthony Duclair.

Florida carried the action to begin the second period as well. Nikita Gusev extended the Panthers’ lead to two at 2:30 into the period and it felt like the visitors might be able to comfortably put this one out of reach relatively early.

The Blackhawks’ power plays were ugly and flat. Duclair sat for two minutes in the first period and Radko Gudas went off late in the second. For 1:55 of the second power play Chicago looked like the mediocre advantage they’ve shown far too often in the second half of the season. But a faceoff win inside the final seconds of the power play opened the door for a Connor Murphy blast that found the mark.

Brett Connolly and Adam Gaudette picked up the power play helpers on Murphy’s goal that came with one second remaining in the Gudas penalty.

Less than one minute later, Gaudette led a good rush with pace and dropped a pretty pass for Alex DeBrincat, who ripped home his team-leading 25th of the year to tie the game at two.

Gaudette picked up his second assist in 52 seconds. Ian Mitchell, who returned to the lineup finally, was credited with the second assist.

So, in review: the Blackhawks were outskated and outworked for most of the first 34 minutes of the game. Then, in 52 seconds, the Hawks show some backbone. The skill showed up and turned into exciting scoring opportunities that produced goals. And a two-goal deficit became an even match.

A glimmer of hope arose from what had been a turd. We’ve seen it all year, and this came in a game against one of the better teams in the entire NHL.

So how would the Blackhawks finish?

Aleksander Barkov scored with seven seconds left in the second period to give Florida a 3-2 lead heading to the room.

Duclair scored his second goal of the night 28 seconds into the third period to push the lead to two.

Owen Tippett scored 59 seconds into the third period to make the score 5-2 in favor of the Panthers.

That hope? Dead. Wheels: off. And the stink was once again rising from the corpse of the 2021 campaign.

The ever-stoic Jeremy Colliton did nothing. That one time he burned his timeout to slow down a run? Hasn’t happened since. At least he didn’t yank Kevin Lankinen once the game was out of reach again in this one. Lankinen would undoubtedly like to have a couple back but he was left on an island far too often once again.

Chicago desperately needed a power play if they were going to come back (again). And Frank Vatrano obliged, taking an incredibly dumb, worthless penalty at 10:42 into the third period with his team up three goals.

With 14 seconds left on the advantage, Kirby Dach tipped in his second goal of the season to cut the lead back to two.

Philipp Kurashev and Brandon Hagel picked up the assists on Dach’s goal. But Chicago was still chasing two with under eight minutes left in regulation.

Lankinen went to the bench for the extra attacker with 2:25 left in regulation. It took the Blackhawks until there were 18 seconds left in regulation to cut the lead to one. Dominik Kubalik scored to make it somewhat interesting. DeBrincat and Patrick Kane picked up the helpers.

When Chicago got a late power play with 7.8 left in regulation, there was another glimmer of hope. But a lost faceoff (surprise!) led to the ending that was expected.

The Blackhawks made it interesting twice. They looked awful for a lot of the game. And they wound up losing to a significantly better team by one.

The Panthers finish the 2021 season 6-2-0 against the Blackhawks.

Mitchell skated 15:16 with one assist, three blocked shots and one hit.

There’s a lot to like about what we’ve seen so far from Gaudette, who picked up two assists in 11:15 and once again flashed some good speed.