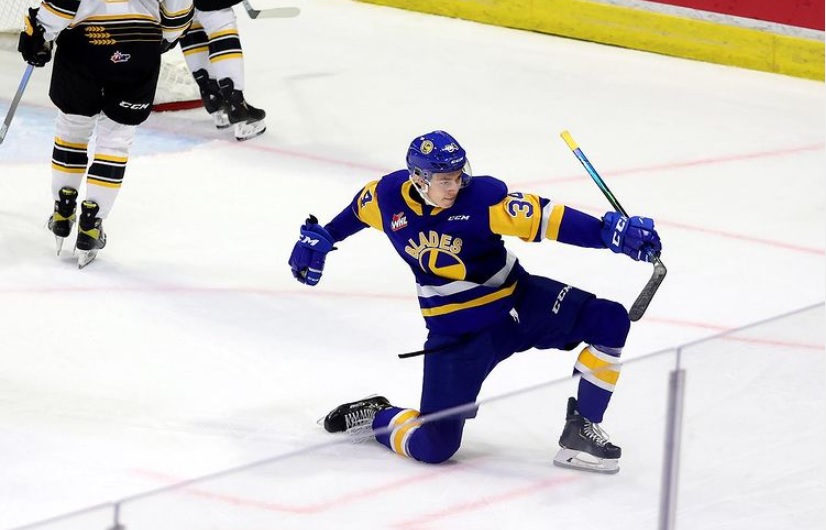 With their second round selection (#62 overall), the Chicago Blackhawks have selected Kirby Dach’s younger brother, Colton.

Can’t wait to see your NHL dreams come true, Colton. Take it all in this weekend!! @PlayersTribune pic.twitter.com/roYRP06ywo

Dach took a good step this season, becoming a top player for Saskatoon and scoring a point per game in the WHL. He’s a big center with very good puck skills who can show good flashes of playmaking to go with a good goal-scoring touch around the net. He’s fine off the puck, but Dach’s major limitation as he advances levels will be the lack of quickness in his skating and ability to generate controlled entries despite his size and skill. Once he’s in the zone he is dangerous, though. In a sentence, Dach’s size and skill give him a chance but it’s questionable whether his skating will hold up in the NHL.

#80 overall prospect
“The younger brother of 2019 third-overall pick Kirby Dach, Colton has the same big frame, which he uses well. Dach’s standout tool is probably his shot as he can absolutely let it fly. He scored 11 goals in 20 WHL games this season and is just as effective at the net front as he is with outside shots. The issue with Dach is his skating is not at a level that projects very favorably to NHL regular. I think the hands and his size can carry him a bit, he seems to have pretty good hockey sense if not spectacular. But the stride is heavy and that could scare teams away even in a draft where there’s not a ton of high-end skating talent.”

Skating
Coming in at 6-foot-4, Dach is a decent skater for his size. He will never be known as a burner. He has above-average top-end speed. However, his first few steps and acceleration can use some improvement. Dach also has very good edgework and agility for his size. This allows him to weave in and out of traffic both with and without the puck. Dach has a long, powerful stride. It is very difficult to knock him off the puck. Dach also has excellent balance. This should only improve as he continues to add muscle to his frame. This allows him to fight through checks and control the puck down low. He is also able to win battles along the boards and in front of the net.

Offensive Game
Dach combines his size with good stickhandling ability. This allows him to protect the puck and create plays in the cycle game. He is very good down low, controlling the puck and giving his teammates time to get open. When they do get away from a defender, he can use his long reach and quickly shift the angle on his stick to open up a passing lane. Dach has the skill to get the puck to a teammate to create that opportunity. However, his passing is a little inconsistent as there are times he can miss his attempts. His vision is very good though.

Dach also has a very good wrist shot and release. He generates a lot of power on his shot. The puck is also deceptive off his stick and this creates issues for goalies. He also has a good slap shot and one-timer. Dach often plays on the point on the power play, sneaking into the top of the faceoff circles and using his wrister, or taking the slapper from the line. Dach uses his size to get to the dirty areas of the ice. When he is in front of the net, his size creates issues for goaltenders. He also has the skill to elevate the puck quickly and get it into tight areas. He also has the hand-eye coordination to tip in shots and quickly pounce on rebounds.

Defensive Game
Dach also uses his size effectively at the defensive end. His long stick cuts down passing lanes and takes away the middle of the ice. He is also willing to use his size and strength to support the defence against the cycle game and work the boards down low. Dach reads the play well and is able to cut plays off and create turnovers. While he is not a big hitter, he is willing to use his size to his advantage, leaning on opponents to win battles along the boards. He plays a very disciplined game, not getting out of position chasing the puck or a big hit. He is also good in the face-off circle for his age.

Projection and Comparison
With his size and skills and pedigree, Dach should be an intriguing prospect in this draft. Of course, he is not the sure-fire can’t miss prospect that his brother is. However, he still could be an effective middle-six player in the NHL if he reaches his potential. His versatility to play both centre and wing is intriguing. Dach will need to improve his skating to stay at centre and to take his game to the next level though. His game is very reminiscent of his brother, but this is a stylistic comparison only and not one based on skill and ability.