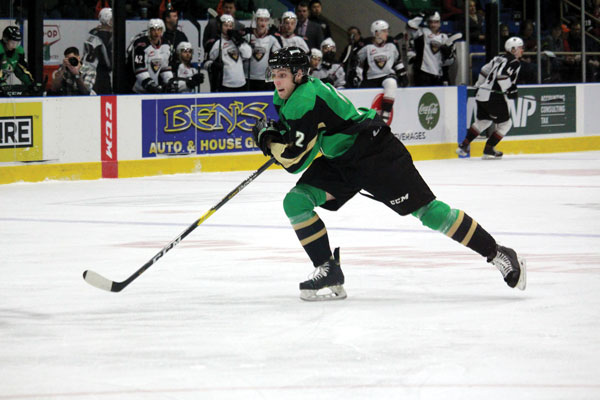 The Chicago Blackhawks made huge headlines with a trade just before the start of the 2021 NHL Draft. The acquisition of defenseman Seth Jones dropped the Blackhawks from the 12th overall selection to the final pick of the first round on Friday night.

Which meant a long night of waiting.

But when the time finally came for the 32nd pick, the Blackhawks called their name.

Allan’s statistics won’t inspire you (11 points in 81 career WHL games), but he is a 6-foot-2 defenseman who can kill a lot of rushes with his gap control, physicality and reach and can kill penalties well. He can make a pro-caliber first pass but his game lacks offense due to a lack of puck skill and creativity. He’s not going to be leading rushes or running a power play at the higher levels but he does show flashes with the puck of playmaking instincts. His skating is good enough for his frame and to be an NHL player, but his quickness won’t jump out to you. In a sentence, Allan projects as a “hard to play against” third-pair NHL defenseman who has limited offense.

A physical, low-offense defenseman, Allan plays his position very well. He closes gaps, makes smart reads and can he ever lower the boom when needed. Allan has good mobility, too, which makes all those other traits more impactful for him. He is so tough to beat in the hard areas of the ice, using either his length or his mobility to get position and then using his strength to displace the puck. My concern, however, is that the offense is never going to come around and if it doesn’t, that makes it harder to climb the ladder.

Skating
Allan is a solid skater, especially given his size. His mobility allows him to play a solid defensive game. He has a good stride in both directions and is especially quick going backwards. His crossovers are strong and efficient. They allow him to pick up speed while defending, and also give him good lateral movement to maintain his gap control. His agility is also very good and it is tough to get around him in one-on-one situations. Allan is strong on his skates. He is tough to knock off the puck. He also does a good job of winning battles along the boards and in front of the net. Allan should only continue to get better at this aspect of his game as he continues to mature and get stronger.

Offensive Game
What you see is what you get with Allan’s offence. There is not a lot there. Rather it is his defensive game that is his calling card. Allan makes a good first pass to start the transition game but does not carry the puck up the ice himself very often. He is also not the type to join the rush as a trailer, preferring to stick to his defensive responsibilities. In the offensive zone, he lacks offensive instincts. Allan moves the puck quickly, taking the safe pass instead of being patient at the line and finding scoring opportunities.

Allan can also work on his shot. He doesn’t use his lateral mobility well enough to open up shooting lanes. As a result, Allan’s slapshot can either hit the defender’s shinpads or miss the net. He is a bit more effective with his wrist shot though. He has good power and a quick release on it. However, Allan does not shoot enough. Again he prefers the safe pass around the perimeter of the zone and asks teammates to do the offensive work. He is also pretty safe at the blue line. He does not pinch in to keep the play alive very often.

Defensive Game
Allan is an excellent defender for his age. He is very physical and will through a big hit if an attacker comes down his side of the ice with his head down. He maintains very good gap control and funnels attackers to the outside and away from the net. If they try to sneak by him, he will lower the boom. Allan also likes to step up in the neutral zone to throw these hits or to make a poke check and cut off the attack before it even reaches the defensive zone.

In the zone, Allan is physical in defending the cycle along the boards and fights for loose pucks. He also does a good job of keeping the front of the net clear. Allan is strong positionally, with his active stick cutting down passing lanes. He reads the play well, anticipating the plays of opponents and cutting them off. Allan is particularly strong on the penalty kill, maintaining his position and cutting off passing and shooting lanes. He also does a good job of preventing the opponents from setting up and getting the puck down the ice. When a turnover is created, he is able to move the puck up the ice quickly with a pass, helping his team transition to offence.

Projection and Comparison
Allan has the size, skating, physicality and defensive skills to develop into a top-four defenceman. He will likely never be the lead defenceman on his pair but would be a compliment to a more offensive defenceman. With his ability to dominate defensively in the WHL, there is hope that he can take more risks and develop some offence in the next couple of years. That would be a real bonus to the team drafting him, but it’s really the defensive projection that will get Allan drafted. He could play big minutes against opponents’ top lines and on the penalty kill if he reaches his potential. Allan’s game is reminiscent of Joel Edmundson, but this is a stylistic comparison only and not one based on skill and ability.