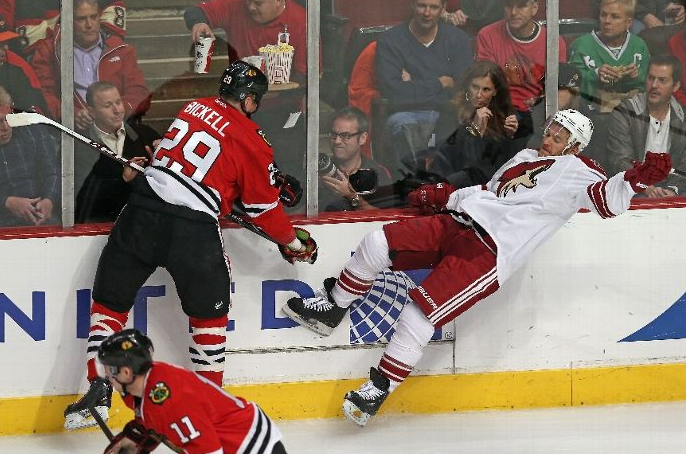 Mike Smith played another fantastic game at the United Center, but the Blackhawks were able to emerge with a 5-4 shootout victory over the Coyotes on Thursday night.

For the third time this year, Phoenix allowed at least 50 shots on net; the other two were against San Jose. Smith was strong in net, though. He faced 40 shots in the final 40 minutes of regulation, and stopped 48 of 52 in the game.

Fortunately for the Blackhawks, Corey Crawford was the better of the two netminders in the shootout, and Chicago emerged victorious. Crawford faced only 30 shots, all during regulation, and stopped 26 in the victory.

Brandon Saad opened the scoring with his fifth of the season, and Patrick Sharp scored a power play goal less than four minutes later to give the Blackhawks a 2-0 lead less than seven minutes into the first period. But only 41 seconds after Sharp’s goal, the Coyotes got on the board and tied the game on a Shane Doan power play goal later in the first.

Marian Hossa gave the Blackhawks the lead once again with his ninth of the season at 5:05 into the second, and the Hawks would hold onto the lead for almost 10 minutes. But two goals from Phoenix just over two minutes gave the Coyotes their first lead of the game.

For only the third time this season, the Blackhawks were trailing after two periods.

Exactly three minutes into the third period, Brandon Pirri redirected a Brent Seabrook shot past Smith to tie the game. That would be the last time either goaltender would allow a goal in the game.

Pirri played well in the victory. He scored his fourth of the season in only his 14th game, and won seven of 11 faceoffs. Coach Joel Quenneville showed some confidence in the youngster by sending him out fourth in the shootout, and Pirri responded with the game-winner.

Jonathan Toews, Patrick Kane and Nick Leddy had two assists each to lead the offense. Toews won 13 of 24 faceoffs, while Kane led all Hawks forwards skating 22:57 in the game.

Andrew Shaw skated over 19 minutes in the game, and once again mixed it up with Smith. In the third period, less than two minutes after Pirri tied the game, Shaw was pushed into Smith who took exception (but didn’t fall down, shockingly). Smith’s retaliation cost his team a power play; Shaw was called for interference, and Smith received a roughing minor.

Shaw won eight of 18 faceoffs and was credited with four shots on goal and three hits in the game.

Bryan Bickell had one of his more physical games of the season, leading Chicago with five hits. After Brandon Bollig foolishly doubled a minor penalty by adding an unsportsmanlike to a holding call only ten seconds after Doan’s power play goal in the second, his ice time evaporated; he was on the ice for only 7:21 in the game.

Seabrook led the team with four blocked shots and also contributed three hits in another strong performance. The Hawks’ six defensemen were credited with 14 shots on net in the game.

Jeremy Morin returned to the lineup and, once again, had the lowest ice time on the Hawks’ roster (6:57). In his 11 shifts he was credited with five shots on net, one hit and one takeaway. He had a couple good shifts, but hasn’t distinguished himself yet this season.

Before the game, the Hawks recalled Alex Broadhurst from Rockford and placed veteran Michal Handzus on IR. The 20-year-old had four goals and seven assists in 16 games with Rockford to start the season.

UPDATE: After the game, Morin and Broadhurst were sent back to Rockford when the Blackhawks announced they had acquired forward Kris Versteeg from Florida. 7 thoughts on “Blackhawks Shoot Past Coyotes”