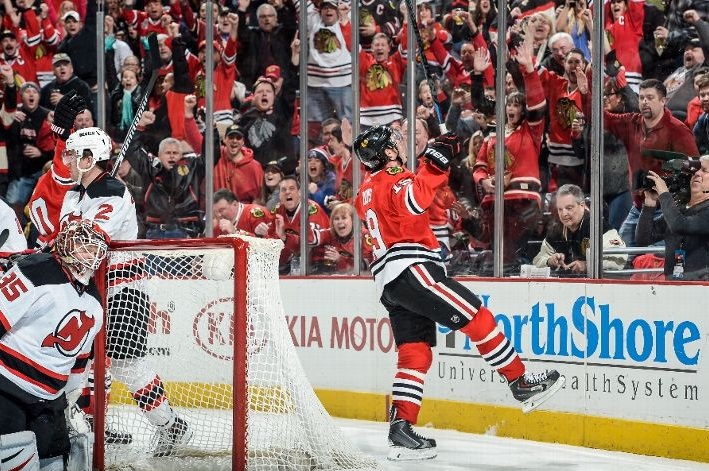 Ryan Hartman wasted no time in getting the attention of his home fans and his teammates had a big third period to pull away from the Devils for a 3-1 victory.

Hartman finished with two hits and three shots on net in 9:05 in his NHL debut. Ben Smith was scratched for Hartman; Daniel Carcillo dressed but got on the ice for only six shifts (4:03).

Unfortunately, Hartman’s hit was the only highlight of the game’s opening 40 minute for the Blackhawks. They put only 18 shots on net in the first two periods (New Jersey had 17) and had yet to beat Cory Schneider on two power play opportunities. Defenseman Peter Harrold snuck a shot past Corey Crawford at 15:30 into the first period to give the Devils a lead they would carry to the third.

Michael Ryder went to the box with four seconds left in the second period, and the advantage to open the third period served to be just what the Hawks needed. Marian Hossa stayed ridiculous, scoring his seventh goal in the last four games on the power play to tie the game. On their next shift, Hossa exploded up the ice and put a shot on net that Schneider denied but did not control, and Jonathan Toews put home the rebound for the game-winning goal.

When Kris Versteeg added an empty net tally in the game’s final minute, the Devils were finished.

Hossa finished the night adding an assist, one hit and one takeaway in the game. Brent Seabrook had two assists and led the team in both blocked shots (five) and hits (three). Seabrook also had the highest ice time on the night, skating 26:47 in the win.

Crawford had a great night, and made a number of big stops in the third period to keep his team in the game and preserve the lead. Quickly after Hossa tied the game, the Devils were able to create a great scoring opportunity but were denied by Crawford. The Blackhawks netminder finished with 25 saves.

The victory was the 137th regular season win for Crawford, placing him in a tie with Jocelyn Thibault for fourth in franchise history.

Kyle Cumiskey skated 11:27 and was credited with one shot in the game. 29 thoughts on “Blackhawks Show No Sympathy For The Devils”