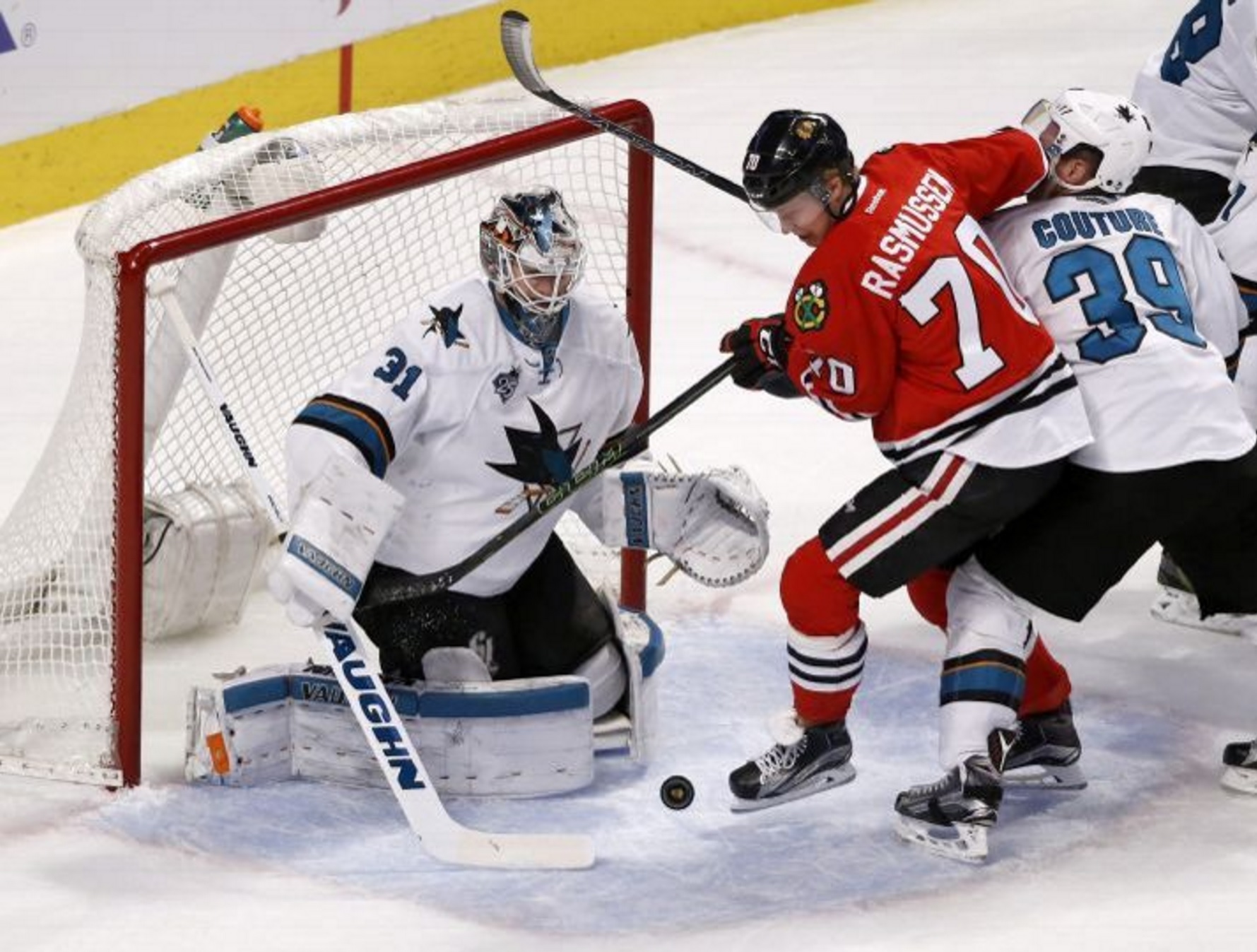 The Hawks started the game without Artemi Panarin, who was scratched because of an illness. Unfortunately, it turned out that the entire offense needed some medication.

Chicago had chances in the first period. Two power plays led to ten shots in the opening 20 minutes; San Jose was credited with only eight on net in the first. And with 2:37 remaining in the first, a puck got past Martin Jones into the San Jose net.

That puck appeared to bounce off the lower leg of Brandon Mashinter. And it appeared there might be a review of the play with the war room in Toronto.

But before that review could take place, the Sharks challenged the play. They claimed Hawks center Dennis Rasmussen had interfered with Jones.

And the league agreed.

For the second time in a week, the Blackhawks had a goal taken off the board by a coach’s challenge when it appeared the Hawks player in question was pushed into the opposing goaltender.

The second period saw more shots on net, but only one team scored. Patrick Marleau scored a power play goal 9:09 into the middle frame to give San Jose a 1-0 lead in a period that saw the Sharks out-shoot the Hawks 13-12. The Hawks didn’t generate consistent pressure until the final few minutes of the period, but Jones was up to the task.

Corey Crawford skated to the bench with his team chasing only one goal with two minutes left in regulation. He had stopped 25 of 26 to that point, but there had been no offense in front of him. Joe Thornton bounced a puck into the open net 18 seconds later to extend the lead to two. The Hawks weren’t able to get anything done the rest of the way and fell at home 2-0.

Jones stopped all 32 shots he faced to earn the victory for the visitors.

There wasn’t much to like in the box score for the Hawks. Perhaps the only two bright spots were Artem Anisimov, who won 15 of 21 at the dot, and Jonathan Toews, who won 13 of 19. Marian Hossa led the way with five shots on net, while Jiri Sekac returned to the lineup and finished tied with Teuvo Teravainen with four shots. Sekac skated only 7:44 in the game, the lowest on Chicago’s roster.

Coach Joel Quenneville spread out the ice time among his defensemen. Duncan Keith (23:18) and Brent Seabrook (23:44) predictably led the way, but the other four defensemen were all held under 20 minutes. Niklas Hjalmarsson (17:39), Erik Gustafsson (19:03), Michal Rozsival (17:29) and Trevor van Riemsdyk (17:03) didn’t help initiate the offense as the Hawks’ blue line group has done recently.

Unfortunately, Dallas won in overtime earlier on Tuesday night, cutting into the Hawks’ lead in the division. The Hawks host the Stars on Thursday night at the United Center.

65 thoughts on “Blackhawks Shutout By Sharks”