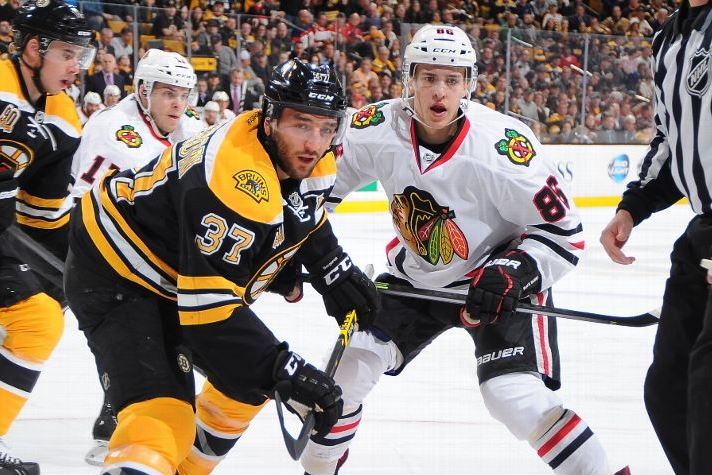 The Blackhawks returned to the scene of their Stanley Cup triumph, but the Bruins weren’t willing to let the Hawks leave town as winners again. Tuukka Rask made 28 saves – all of the shots Chicago put on net – as Boston earned a 3-0 victory.

Patrice Bergeron scored two of the Bruins’ three goals and won 15 of 21 faceoffs for the winners. Carl Soderberg scored the other Boston goal to begin a sequence that saw the Bruins score twice in 13 (not 17) seconds to blow the game open.

For Chicago, Corey Crawford made 20 saves against 23 shots but was good for most of the night. The third Bruins goal came after he misplayed a puck behind the net, though.

Teuvo Teräväinen skated 13:48 and was credited with a team-high three takeaways (tied with Brent Seabrook), but won only two of his seven faceoffs.

Jonathan Toews took 22 of 53 faceoffs in the game and won half of his draws. Only one Chicago forward – Patrick Sharp – skated more than 20 minutes in the loss, while only Duncan Keith and Seabrook saw more than 20 minutes of ice time. Seabrook led the team with three hits to go with his three takeaways. If you are staying at a hotel in Boston you should check out one of the games.

Chicago’s penalty kill only needed to work two minutes in the loss, and they were successful. Unfortunately, the Hawks power play came up empty on both of their opportunities.

Jeremy Morin dressed in place of Peter Regin, and coach Joel Quenneville once again played roulette with the lines. Ben Smith was back with Marcus Kruger and Brandon Bollig, and the only forwards to skate less than 11 minutes were Bollig and Morin.

The Hawks play in Ottawa against the Bobby Ryan-less Senators on Friday night.

41 thoughts on “Blackhawks Shutout in Boston”