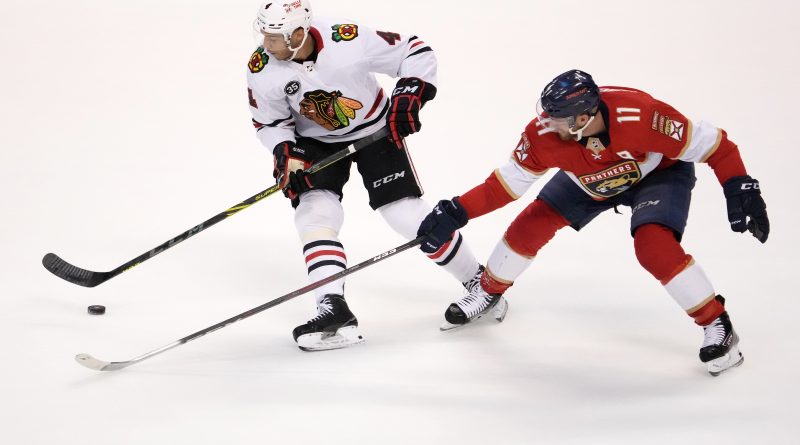 I would love to tell you that Jonathan Toews was the knight on the white horse, riding to the rescue in his 1,000th career regular season game against the Florida Panthers on Thursday night.

I would love to tell you that Collin Delia distinguished himself against a really good offensive team. That the defensive group — once again without Alex Vlasic because Erik Gustafsson continues getting ice time for some reason — was able to kinda sorta contain the offensive firepower of the Panthers.

I would love to tell you that the Blackhawks had any secondary scoring whatsoever. That they had any chance in hell of playing with the Panthers.

Aleksander Barkov scored the first and fourth goals of the night for Florida. Ryan Lomberg and our old friend Gustav Forsling scored in the second period. Sergei Bobrovsky was solid, stopping all 37 shots he faced.

Delia stopped 40 of 44. He didn’t have much of a chance, but he didn’t help himself. A fifth goal was taken off the board in the first period because it was kicked into the net.

After the game, Derek King talked about how his fourth line had some sandpaper to them. Yet Reese Johnson (who won six of seven at the dot) got only 14 shifts and 8:52 on the ice. Mackenzie Entwistle got 13 shifts and 8:16. And Boris Katchouk got 15 shifts and 9:41.

If you liked what you saw from them… and you’re the head coach… maybe give them more ice time?

Toews won 12 of a team-high 19 faceoffs and put four shots on net. Patrick Kane was credited with seven shots on net.

Oh, Barkov won 12 of 15 faceoffs with his two goals on the night.

What we painfully witnessed on Thursday night was a reality check. The Florida Panthers are an elite team right now — one of the best in the NHL. They might be the best. And the Chicago Blackhawks are just about the polar opposite.

The Blackhawks now have… less than 24 hours before they face Brandon Hagel and the Lightning on the other side of Florida.