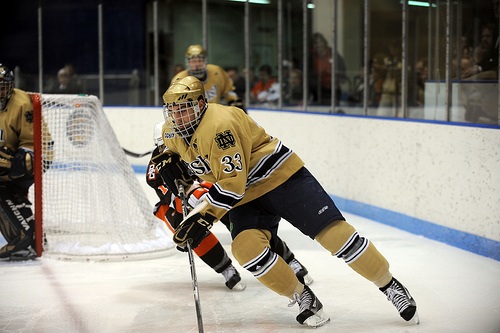 On Monday the Chicago Blackhawks announced that they had signed defenseman Joe Lavin to a two-year contract, beginning in the 2011-12 season. He had been the captain at Notre Dame, who just lost to eventual NCAA champion Minnesota-Duluth at the Frozen Four.

So what does this mean to the Blackhawks blue line?

Consider the players the Blackhawks have in the NHL right now:

Now consider that GM Stan Bowman indicated when he traded for Chris Campoli that the Hawks had interest in keeping the soon-to-be restricted free agent around longer than a few weeks. Even without Campoli, the Blackhawks have five very capable NHL defensemen under contract for next year.

However, the blue line in Rockford is getting crowded. Look at the kids under contract in the Blackhawks’ system:

There is something else these five prospects share in common: NHL cap numbers under $1M per season.

This list doesn’t include Brian Connelly, the IceHogs representative at the AHL All-Star Game this year. He, like Campoli, is a restricted free agent after this season. Also restricted this summer is Ivan Vishnevskiy.

The five minor league players all could probably use more time developing in Rockford. But one, Lalonde, was very impressive skating with Leddy at the Hawks’ Prospect Camp last year and ranked second among Rockford defensemen in points this year (behind Connelly).

I’m not trying to imply anything by putting the numbers of these two defensemen next to each other, but….

The addition of Lavin adds to a stockpile of talented players on the blue line in Rockford. With a decision needing to be made regarding Connelly this summer, and the new deal for Seabrook hitting the books next fall, someone on the current roster might not be back.