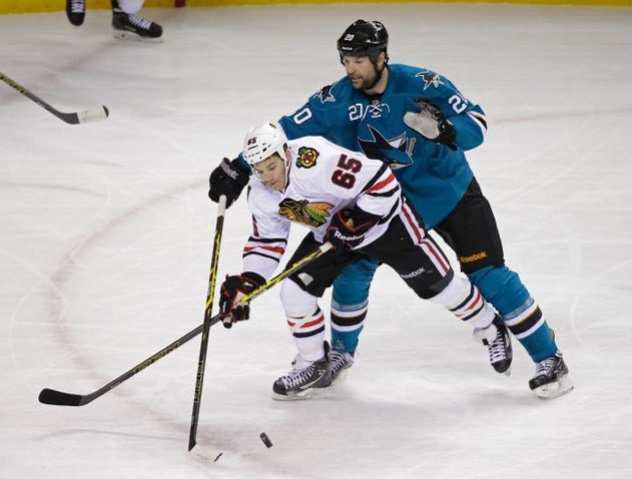 One night after a dominant victory in Anaheim, the Blackhawks weren’t able to solve Antti Niemi and fell to the Sharks 2-0. Niemi posted a 31-save shutout of his former teammates and kept his team ahead with some big saves in a second period that saw Chicago out-shoot their hosts 15-6.

Unfortunately for the Blackhawks, Duncan Keith scored the game-winning goal. Antti Raanta struggled to contain a rebound five minutes into the game and Keith, who was battling with Joe Pavelski in front of an empty net, inadvertently whacked the puck into the Hawks’ net. Melker Karlsson was credited with his eighth goal of the season on the play, and that would prove to be all the offense the Sharks needed.

Joe Thornton added an empty net goal with 70 seconds left in regulation to cap the scoring. Thornton and Karlsson had two points each in the game to lead San Jose.

The Blackhawks passing wasn’t great the entire night, a symptom of lively boards and playing their third goal in four nights. Chicago didn’t generate many great chances, but their best was taken away by a terrible call by the official. Jonathan Toews took a breakaway in on Niemi, and was trying to get a loose puck into the net as Niemi failed to secure a rebound. With the puck almost a full foot away from Niemi – who was on his back – the official blew the play dead, killing any subsequent scoring chances for Toews.

There have been a few rough nights for officials working Hawks games this year, but this night may be the worst. The exclamation point on the night’s futility from the stripes was an icing call in the third period… that was called as Niemi played the puck.

Teuvo Teravainen only skated eight shifts (6:54) – including only two shifts in the game’s final 30 minutes – and Joakim Nordstrom was limited to 12 shifts (7:25) in the game. David Rundblad only got on the ice for three brief shifts in the second period and was held to only 10:49 on the night.

After his early rebound issue let in the eventual game-winner, Raanta was solid for most of the rest of the night. He made 18 saves against 19 shots in the loss.

Coach Joel Quenneville was hoping to pick up his 300th win as the head coach of the Blackhawks on Saturday night, but will have to wait a few more nights. The Blackhawks are back on the ice Tuesday night in Minnesota.