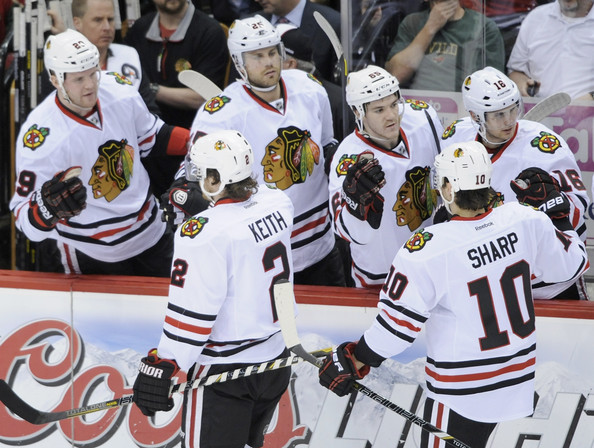 After a less-than-stellar Game Three, the Chicago Blackhawks answered the bell in Game Four with one of the most dominant defensive performances of the last three years. With Corey Crawford making all the saves necessary to secure the victory and Patrick Sharp once again providing the offense, the Hawks bring a 3-1 series lead home. The Wild were forced to use Darcy Kuemper, the third goaltender on their depth chart entering the postseason, for the final two periods after Josh Harding appeared to suffer a lower-body injury. Kuemper allowed Sharp’s second goal of the night on the first shot he faced in the second period.

Sharp, who struggled to put the puck in the net during the regular season when healthy, now has two multi-goal games in the first four contests of the postseason.

The story of the night wasn’t the injury to Harding, or Sharp’s return to form offensively, though. It was the Blackhawks’ suffocating defense.

Crawford was credited with the shutout, but he got a lot of help from the skaters in front of him. While Crawford made 25 saves, the Hawks blocked 26 more before they got to the netminder. Johnny Oduya led the team with five, and Michal Rozsival had four to lead the team.

The Hawks weren’t as disciplined as they undoubtedly would have liked, but their penalty kill continues to be dominant as well. Chicago killed six Minnesota powerplays in the game, including two that were almost back-to-back early in the third period.

Michael Frolik and Marcus Kruger had another exceptional night on PK duty, with Frolik blocking three shots in 5:33 of short-handed ice time. Kruger won 10 of 18 overall faceoffs and skated 6:51 short-handed.

Jonathan Toews won 16 of 21 faceoffs to lead a better performance at the dot on Tuesday night. Chicago’s captain was also credited with two blocked shots and two takeaways in the game.

Daniel Carcillo dressed. He skated eight shifts, spending 3:55 on the ice and 2:00 in the penalty box.

Bryan Bickell added the nail in the coffin late in the third; for Bickell, it was his third goal of the postseason. The Blackhawks third line was significantly more physical on Tuesday night.

Duncan Keith was already plus-one on Tuesday before the game began; he played without sleeping after his first born son entered the world earlier on Tuesday. Colton Duncan Keith weighed 7 pounds 7 ounces. Colton’s father skated 23:57 with one hit, two blocked shots and was plus-two in the box score.