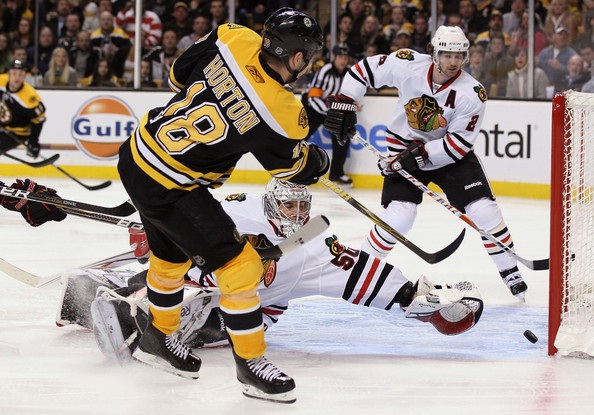 The Blackhawks played one of their better efforts in the last few weeks in Detroit on Monday night, beating the first place Red Wings in overtime.

Then they travelled to Boston, where the physical Bruins were waiting and rested. The Hawks appeared jetlagged, and weren’t able to beat Vezina-candidate Tim Thomas even once. They were shut out.

So how does the result – two points from two games – feel?

The Boston game failed the eye test, largely because the Bruins physically took the Hawks out of their game from the get-go. But the fact that the Blackhawks skated with, and ultimately defeated, the Red Wings in their building was important.

With the dust settled from 48 hours that were labeled as critical over the weekend, the Blackhawks have a three point edge on the Dallas Stars for the final playoff spot with the Stars having six games left (the Hawks have five).

For as mediocre as the Blackhawks have appeared at times, the Stars have been worse. They’ve lost four in a row, and Brad Richards hasn’t looked nearly as effective since returning from injury.

The point is: the Blackhawks might be able to back into the playoffs at this point.

Hopefully they don’t know it.

Chicago faces Detroit two more times in their final five contests, which at this point are more crucial to staying in the playoffs than what appeared to be a chance at catching the division leaders just a couple short weeks ago.

Anaheim continues to roll, doing the Blackhawks no favors. For all the fans in both Chicago and Vancouver that wanted a rematch this year, it might happen in the first round of the playoffs.